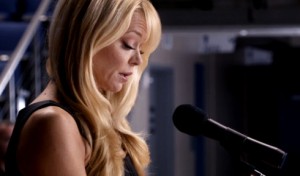 Olivia gets up in front of the press during a live conference and delivers a statement confirming that Mia was the Devil Girl whose body was found in the water under the bridge. She goes through the motions and quickly gets off the stage while the cameras are rolling, upset at the fact that Oscar made her do something PR should have taken care of and that she had to portray Mia as depressive and unstable. Oscar, however, tells her that this is what she signed up for when she took the job of Devil Girls director.

Ahsha, meanwhile, has been staying with Raquel after breaking up with German, but Kyle isn’t going to let her wallow in the pain and dumps water on her to get her out of bed. Sloane, who Ahsha is still on the outs with after finding out about Pete, is visited by Pete the morning of the announcement and he confronts her about the reasoning behind the breakup and her unwillingness to entertain the idea of a relationship. She confirms that he broke her heart so deeply and so thoroughly when they were younger that allowing the chance of it happening to her again would crush her spirit for good. Pete leaves and later at the game, watches as Ahsha is named to the All-Star team, beating out Jelena due to the news coverage she had received in recent days.

After Ahsha talks to the post-game media about her victory, Jelena takes her aside and lets her know that she was impressed with how her rival was willing to do anything to get on the All-Star squad. The Ahsha that she met in auditions, all bright-eyed, idealistic, and unbeatable, would have never done something like this, but this Ahsha, the one that has emerged in recent episodes, is someone Jelena feels like she can compete with. At an after game dinner, Olivia expresses worry about Oscar’s micromanaging of the Mia case and the vibe that she’s been getting that there’s another reason he is so interested in the details of how they’ll handle what happened to Mia. For his part, Chase wants her to not worry about Oscar and to enjoy the win by Ahsha.

While Terrence blows Jelena off to tend to All-Star publicity, though he informs her that he’s considering something neither good nor bad, Ahsha has to deal with Sloane showing up at the arena claiming to have something to talk about. However, Ahsha’s not in any mood to hear from her mother and storms into the lockerroom without hearing the reason she came down there in the first place, opting to focus on celebrating her win in the vote. Derek volunteers his services on a strictly platonic basis, but Ahsha says she’s only in the mood to drink alone. She ends up driving to the building she used to live in with German and upon seeing him sitting in the stairwell with another woman, stumbles out, knocking over a trash can, and drives away.

As he’s looking at an article about Ahsha’s family situation, Oscar tells Chase that Olivia soon won’t be a problem and that the Mia thing wouldn’t have been a problem had the former player not put his hands on her. Mia came to Oscar claiming to have been raped by Chase, likely the event that caused the owner to push her away and the entire stack of dominos to come falling shortly after. Back at the arena, Pete uses her broken heart and Raquel’s glowing mood as motivation to ask her out, which she accepts, while Ahsha agrees to go out with Derek that evening and celebrate the win strictly as friends. They park on top of a large hill and toss rocks down below, giggling when Ahsha breaks someone’s window in the process. She thanks him for the night and he kisses her hand; she kisses his hand back and soon, they’re kissing on the lips and having sex on the back of the car.

Kyle arrives at the strip club and sees Lexie, the dancer who made fun of her exotic dance background, on the pole. She joins in and scares the girl offstage, where she needles her for being a hypocrite (and having a big ass) and asks for her to tell Benny, the man who wrote the ominous note, that she was coming for him. Pete’s date with Raquel might have started off a bit awkward, but soon, they figured out how to be around one another in a romantic, non-arena capacity and spent their night in his hotel room eating ice cream. He asks her for a second date and she agrees as part of her earlier expressed love of disasters.

Jelena drops a major bombshell on Olivia in the Devil Girls practice area – she owns 10% of the Devil Girls (thanks to her “poisoning” Terrence) and with Oscar’s 41% majority share, has hereby fired her from being the squad’s director. Spitting mad, Olivia wants to go into Oscar’s office and rip his face off, realizing why he made her the face of the Mia death. But Oscar has no time for meetings, not when he’s naming his new director of the squad, someone with experience with the Devil Girls and decidedly less headstrong as Olivia. The new director? Sloane, who claims that it’s nice being home during her press conference.

German arrives at the arena and tries to talk to Ahsha about the night before, claiming that the girl she saw him with was a co-worker and nothing more. He says that he’s not the type of person to hook up the day after a breakup, but Ahsha quickly leaves to get ready for that night’s game, embarrassed at herself for falling for Derek’s charms. With her box of belongings in hand, Olivia is ready to leave the arena and runs into Sloane in the practice area. The reason she took over the position from Olivia? Ahsha – she doesn’t want to watch yet another girl be torn apart by the Devils organization and after noticing the differences in her daughter, she’s willing to do anything to make a difference.

In the warm-up area, Kyle gets a visit from Benny, her tattooed husband whose bail she had been trying to raise. He had just got out that day and with no ankle bracelet, to beat that. The two share a passionate kiss as the Devil Girls look on. While in the lockerroom, Terrence gets down on one knee in front of Jelena and opens up a ring box to reveal the bottle that she infected him from and caused the positive sample. He knew what she was capable of, but he didn’t think it would ever happen to him, not when he never screwed around on her and even thought of her being the mother of his children. After chastising her for not crying during the argument, he leaves and she breaks down, though quickly putting it all back together for the game.

A week from now, building is set to begin on the new Devils arena, per Oscar, which delights the other executives.. Meanwhile, Ahsha goes to Pete in tears and Sloane is revealed to be working with the league on an inquiry against Oscar, who she plans to destroy once and for all.

Additional thoughts and observations:
-I can’t even tell you what my favorite moment of this (very good) finale was, you guys. Anything with Jelena and Olivia drag queening it out is a delight, but I also really enjoyed Jelena’s “this Ahsha I can compete with” smackdown and Kyle’s dressing down of Lexie in the club. Mop, mop, indeed.
-Also great: Terrence having a backbone and rightfully bringing the pain over Jelena’s manipulation. The added theatricality of getting on his knee and acting like he was proposing made this ridiculous in the best way.
-Do you think that Mia actually jumped? I could see her thinking that she had lost and that this would never go away, leading to her jump, but is there a chance she might have been pushed?
-Underrated part of the show: the glances between Jelena and Ahsha while they’re out on the floor. They say quite a bit each time and bring a bit of subtlety.
-Favorite performance from the season? Although the choreography has been one of my favorite parts of the show, the water dance from the episode with the calendar shoot was a whole other level.
-What do you think about how they set up next season? The only thing I’m concerned about is where Olivia fits into all this after being fired from the Devil Girls. Aside from that, I’m counting the days until the second season, with Sloane trying to bring Oscar down, Ahsha not being able to stop her downward slide, Kyle dealing with a newly free husband, Pete and Raquel trying to get something started, and the arena hovering in the background.
-Thank you guys for reading my Hit the Floor coverage this season. I wasn’t even sure I was going to watch the show, but it grew into an immensely entertaining soap and the hour of television I most looked forward to every week. Hopefully I’ll be back when the show returns for a second season so we can talk about Sloane as the mole, Ahsha’s guilt for falling apart as a person, and everything that makes Kyle wonderful.