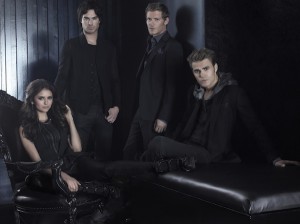 The second episode of The Originals will air (for the first time) on Tuesday, October 8th, along with the ninth season premiere of Supernatural, pushed up a week from its original October 15th premiere. All other CW series will be premiering when the way the network announced sometime last month.

The move does two very positive things for the network. It shortens their fall rollout, concentrating the premiere dates in a tighter timeframe, and provides insurance for The Originals, thanks to the exposure behind The Vampire Diaries. The spin-off will be anchoring Tuesday nights this season and is set to go against the likes of NCIS and Marvel’s Agents of S.H.I.E.L.D., so while it comes with an impressive pedigree/cast and strong lead out, it’s not as sure of a thing as it could be. The new schedule allows for more sampling and could give the series enough padding to where a Tuesday drop won’t be as damaging.

You can check out trailers for The CW’s new series this season here and clips for each series here.

What do you think about the changes to The CW’s premiere strategy? Will the airings behind The Vampire Diaries help jump start The Originals? Which new CW series do you think is in the most danger of being DOA?