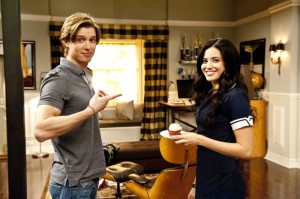 The power dynamic between Remi and Valentina has made a romantic relationship something that falls in the middle of the moral gray area. Though they may have chemistry and a mutual attraction, the closer they get while she’s working for his mother, the more inappropriate said chemistry becomes; even though he might not be actively using his position to get her to be with him, the disparity in power is still there and exudes an influence on their conversations, their looks, their feelings. But beyond all the mushiness that Valentina holds in her heart for the boy she grew up with, the two have a lot of history together and a friendship that’s been going on for as long as Zoila’s been working at the Delatour home, a friendship that she’ll have to use in order to pull him out of a coke binge triggered by Alison and the wiped bank account. Coming up on Devious Maids, will she be able to get through to him about getting the help that he needs?

Sunday, August 4th – “Taking a Message”
A former student recognizes Marisol, potentially blowing her cover. Meanwhile, Valentina makes a discovery about Remi and reaches out to Zoila for help; and Carmen and Sam clash over their relationship.

Sunday, August 11th – “Missing the Baby”
Genevieve lies to her new boyfriend about her age, much to Zoila’s dismay. Meanwhile, Rosie starts work at the Powell’s house; Carmen learns that Odessa is hiding something; and Marisol goes with Taylor to a fertility clinic.

Sunday, August 18th- “Scrambling the Eggs”
Evelyn blackmails Rosie so she can spend more time with baby Tucker; Marisol discovers some new information about Flora; Zoila gets upset when Genevieve presents her with an interesting proposition for Valentina; Carmen is troubled by Alejandro’s reaction to Odessa’s illness.

Do you think it’s Valentina’s place to inform her mother of Remi’s drug problem? What could Odessa be hiding from Carmen and, likely, Alejandro? How long will Marisol be able to keep her cover?