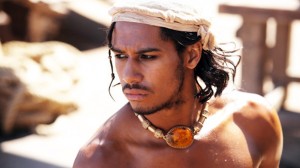 Syfy has decided to end the runs of international acquisitions Sinbad and Primeval: New World early with entire series marathons of each. Both series were already preempted this Saturday for a rebroadcast of social media phenomenon Sharknado, so Saturday, August 3rd, all 12 episodes of Sinbad (including five yet to air in the United States) will air beginning at 11:00 a.m. The 13-hour New World marathon, meanwhile, will air Saturday, August 10th beginning at 10:00 a.m. and includes six episodes that haven’t been aired in the United States.

Both series were originally set to run through the end of next month, but due to modest ratings (about 900,000 total viewers for Sinbad, just over a million for Primeval: New World) and their cancellation overseas (by Sky1 and Space, respectively), the network decided to cut their losses and end their Saturday scripted series experiment early. There’s no word yet on what Syfy will air beginning Saturday, August 17th, whether it be encores of its weekday programming or the return of television movies from their current Thursday timeslot.

Starring Elliot Knight (By Any Means), Sinbad told the story of the flawed title hero embarking on a quest to rid himself of a curse brought onto him by his role in his brother’s death. The show also starred the likes of Naveen Andrews (Lost), Dimitri Leonadis (Centurion), and Marama Corlett (The Devil’s Double). Primeval: New World followed a team of animal experts and scientists investigating paranormal events while battling prehistoric and futuristic creatures. The show featured Niall Matter (Watchmen), Sara Canning (The Vampire Diaries), and Danny Rahim (Eastenders).

Have you been watching Sinbad and/or Primeval: New World this summer? Would Syfy have ended the runs early if they were either already renewed in their respective countries or posting ratings that could bring them back from the dead? Should Syfy continue trying scripted programming on Saturdays, even with the mild ratings of Sinbad and Primeval?