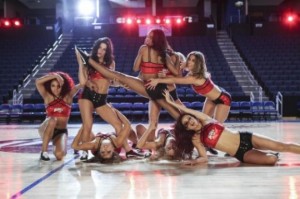 VH1 has announced that scripted drama Hit the Floor has been renewed for a second season. The show is the highest rated new summer scripted cable series for Adults 18-49, as well as the #1 program in cable during its Monday night timeslot among Adults 18-49 (excluding sports and specials), Adults 18-34, Women 18-34, and Women 18-49. There’s been no confirmation of when the second season would debut or how many episodes would be included, but it seems likely that the show would continue airing in the summer and have anywhere between the 10 episodes season one has and 12-15, should the financials work out.

“We always knew that Hit the Floor was a strong project from the beginning and we are thrilled that so many of our viewers agree with us, “ said Jill Holmes, VH1’s Senior Vice President of West Coast Production and Development. “With creator James LaRosa at the helm, everyone in front of and behind the camera has created a compelling, addictive series with high energy dance numbers, and we can’t wait to continue the storyline that’s made it the #1 cable show in its time period among adults.”

Hit the Floor tells the story of Ahsha Hayes, an aspiring dancer who auditions for and eventually lands a spot on the Devil Girls, the dance team for the Los Angeles Devils. However, she soon realizes that there’s more to the position than she expected, as she has to deal with a ruthless squad captain unwilling to share the spotlight and a series of personal revelations that come about only due to her involvement on the team. Can Ahsha manage to hang on and keep her position as a Devil Girl, even with the chaos happening around her? Or will she succumb to the pressure and fall by the wayside?

Hit the Floor airs tonight at 9:00 on VH1. You can check out sneak peeks from the episode here.

What have you thought of Hit the Floor thus far? How do you expect the first season to end? Is there anything specific that you want to see during the second season?