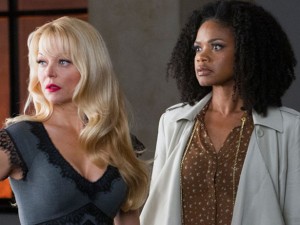 When German punched Derek in the face on the red carpet, he might have hurt more than his hand, as the move could have some serious implications for Ahsha. Already hanging by a string on the Devil Girl squad, she’s had several incidents in her brief time on the floor and has only survived due to Olivia’s hatred of Jelena and desire to win back Sloane’s friendship. She has much less room for error than most of her colleagues and incidents like this only serve as a distraction from her considerable talent and apparent marketability (e.g. the booming calendar sales); not exactly things that you want to go unnoticed on a stage like Devils Arena. But how would Ahsha’s relationship with her boyfriend be after what happened on the red carpet?

On the next episode of Hit the Floor, Ahsha and German clash over the incident, both in terms of the professional ramifications it could have for her and the personal meaning it holds for their relationship. German’s display of jealousy is a sign that their relationship isn’t on as steady ground as it was before Ahsha joined the Devil Girls and considering how chaotic her schedule has gotten lately, there might not be time to repair things before the end of the season. The two have managed to make it this far, through tough times in college and her recent bout of success, but can they find some type of common ground until they have the opportunity to work things out?

Elsewhere on Hit the Floor, Ahsha gets an opportunity to shine at the All-Star game when Jelena is put on the sidelines, while Sloane discovers an alarming secret about the Devils organization and Derek decides to share his true feelings with Ahsha. How will she react to seeing the real Derek Roman and not the Derek Roman that the world knows?

Will Olivia and Pete punish Ahsha for what German did? Is the All-Star snub going to get under Jelena’s skin, particularly since she’s dealing with Terence’s desire to be traded? What do you think Sloane will learn about the team?