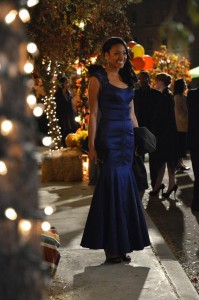 Jo and Danny received a lucky break in their quest to prove his innocence when Lacey uncovered the cryptic note and stack of 100-dollar bills from Gloria’s correspondence. Not only did the clue give them something to pursue and a potential suspect in Regina’s murder, it brought Lacey more on board than she had been previously. This is good because it could eventually lead to the three regaining some sense of their past friendship and Danny and Jo, as invested as they are, need the type of help that Rico’s unable to give. Now that the former best friends have been brought together, and Danny and Lacey have kissed, will they find something out about the envelope that will lead them to who could have killed Regina?

On the next episode of Twisted, the envelope has led them to an apartment in Connecticut, which they think could belong to a guy that Regina used to see. However, Lacey doesn’t know anything about him, as Regina kept all information about him under wraps, and the trio will have to decide if the trip across state lines will be worth it for what they could find out. Danny would be risking quite a bit in leaving Green Grove, considering that he’s not legally allowed to leave the state, while Jo can’t seem to hide the animosity she has toward Lacey, who isn’t even sure that she wants to be this involved in the investigation. However, underneath all the tension and hurt feelings that have been festering for five years, Danny, Jo, and Lacey are still the same three kids who spent most of their childhood together and developed a deep bond through shared experience. And as such, they might not be able to resist helping one another out when needed and repairing their friendship while on the road to clarity.

Elsewhere on Twisted, Kyle is determined to track Jo down, while Rico expresses concerns about Jo’s crush on Danny.

Do you think the mysterious note will lead back to Regina’s Connecticut boy toy? Why would she keep his identity a secret from even the closest of friends? Is the road trip going to lead to Jo and Lacey getting along better?