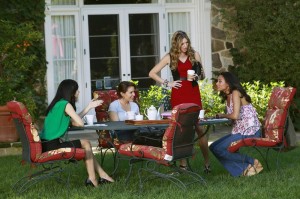 Have you gotten behind on watching Mistresses?

Or is the show something you’ve been curious about checking out, but you don’t have access to all of the episodes?

Well, you’re in luck, as ABC has announced that they’re making every episode aired to date available online through July 22nd on WatchABC.com and the WATCH ABC app, which is free on iPad, iPhone, iPod touch, Kindle Fire and select Android devices. The series, which stars the likes of Alyssa Milano (Charmed) and Yunjin Kim (Lost), reached four-week highs in the ratings last night and is reportedly one of the most-watched shows on the app. The first six episodes of the season are also already available on Hulu and iTunes.

All in all, it’s a good sign that ABC is continue to try and make Mistresses work after Live + SD ratings have been less than stellar. Its DVR numbers are fairly solid and with a marketable cast and the exposure from being available on both WatchABC.com and the app, it might be able to bolster its chances at a second season renewal. Ideally, the show would be able to gain at least a few tenths in the live ratings thanks to the online availability or, at the very least, boost its DVR numbers to the point where a renewal could be feasible, provided there’s a scheduling change. Mistresses had the unfortunate luck to premiere behind a weakened Bachelorette and in a timeslot that has become increasingly difficult this summer, with the additions of Under the Dome, Teen Wolf, and Love & Hip Hop: Atlanta, among others. Should there be enough interest in the show, which is very much on-brand for the network, a move for next summer or, as a remote possibility, a late midseason berth might not be too far-fetched.

Will you be taking advantage of the opportunity and watching Mistresses online? Do you think this will help the series beef up in the ratings? If you’ve watched every week, what have you thought about the show thus far?