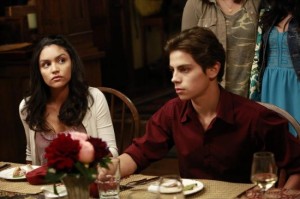 It’s the weekend at the Foster home and while Stef is heading to her father’s to restock his fridge and visit, Jesus is micromanaging the plans for that evening’s dinner, which will feature Lexi’s parents Ernie and Sonia. He wants to make a good impression on them in order to go to a church camp the following week with Lexi, the same day of the adoption fair that he was going to go to with Mariana, and likely make himself less guilty over the morning-after situation. Though he’s teased about how tightly wound he is about something that shouldn’t be driving him this crazy, everyone seems on board to helping him impress the Riveras while remaining true to themselves.

Except for Mariana, that is, as she (and her itchy nose piercing) don’t want anything to do with the dinner or Lexi. Instead, she spends the early part of her Saturday afternoon pretending to be hanging out with Garret when in actuality, she’s meeting with her birth mother. The two have an awkward conversation about the nose piercing, Mariana’s quince, and what happened with Lexi and Jesus before Ana gives her daughter a belated birthday present in the form of a teddy bear. While it may not be much, it’s better than her asking for money again or high-tailing it like she did last time; to Mariana, the bear is a tremendous first step and enough to keep her hopeful that things will be different with Ana this time.

Meanwhile, aspiring photographer Callie (and her Instagram page) is off to her weekly group meeting of foster kids who are in new homes. First, though, she meets up with Wyatt at his childhood home, recently put into foreclosure after his mother missed a few payments. That night, he’s throwing a party and invites her to come along, showing her the closet in his former bedroom where he used to draw when things were bad in his life. He then asks about their relationship status and what exactly they are, which she has no answer for, before trying to get her to blow off the group therapy. As much as Callie would like to stay and hang out, the therapy is a mandatory party of her probation and after narrowly missing violating it last week, she’s not about to press her luck.

She doesn’t actively participate in the meeting, only half-listening to others while she fiddles with her phone. A girl named Sarah catches her ear, though, particularly when Callie finds out that she’s staying with a family with an college-aged son who lives at home. The reason Callie’s so interested in Sarah’s newfound happiness at her home situation? Because she’s staying with Liam’s family. After getting some coffee and taking a photo or two, Callie brings up Liam’s name without prompting Sarah to mention the brother’s identity, creeping Sarah out and causing her to leave early.

Stef’s trip to her father Frank doesn’t quite go as expected when she mentions the religious retreat that Jesus wants to go to. Being that they didn’t raise the kids with any church influence, Stef isn’t exactly thrilled at the idea of her son being indoctrinated to hate his family, but Frank thinks the idea of his daughter’s family getting a dose of Christianity isn’t a bad thing. What’s keeping Stef from allowing Jesus to find his own path is her own poor experience with religion, as her father caught her “cuddling” with a high school friend and subsequently sent her to a youth minister that preached to her that being gay was a sin. In Frank’s mind, though, she had everything when she was with Mike and threw it away to be with Lena, a woman Stef refers to as “amazing” before quickly exiting.

Brandon has an important audition that afternoon with one of the best piano teachers in the state, who has rejected him for the past two years. He tends to get nervous before big musical events and this time is no exception, made worse by Mike showing up 20 minutes late (reeking of alcohol) and causing him to have to audition last. Irritated by his father, Brandon gets into the audition room and makes several mistakes in his piece, a piece he had played perfectly quite a few times leading up to this very moment. When Mike finds out that he didn’t get the scholarship that was being offered, he goes to the piano teacher and begs for another shot for his son, throwing himself in front of the bus and claiming that the tardiness wasn’t Brandon’s fault. The teacher allows Brandon to play the piece again and this time, he excels. He doesn’t earn the scholarship, which was given away earlier, but he gets an offer for the teacher to take him under his wing as a student. Brandon accepts, only to find out that the cost ($150/hour for at least two hours a week) added up quickly. However, Mike insists on paying through either getting another job or taking extra shifts at work; for once, he wants to be the hero to his son.

Mariana is getting anxious the nearer the dinner draws and while Callie takes a picture of the tree outside their bedroom, she talks to her about Wyatt and finds out about the party being held later. She then talks Callie into going and lies to Lena and Stef in order to go, although they still have a 10:00 curfew. The party itself is loud, crowded, and brimming with beer; it also features much more spray paint and other destructive material than Callie anticipated, as Wyatt insists that he’s offering the bank a free remodel of the home. While Mariana ends up drinking in the corner with Kelsey, who spills the beans about Lexi and Jesus’ morning-after incident, Callie takes the opportunity to practice her photography around the newly graffiti-ed home and ends up following Wyatt to his childhood bedroom where he puts a significant hole in the wall. He then crumples up on the ground and she does her best to comfort him, reminding him that while he may be losing a home, he won’t lose everything that happened inside of it – the memories, his childhood – if he doesn’t allow it. After she tells him not to let them take away what matters most, the two share a kiss and he takes a chunk out of the closet wall that he drew on.

Callie goes after Mariana, only to run into a wasted Talya who tells her that Brandon’s into her and that she doesn’t hold hard feelings; she then has to deal with Liam, back in her life after hearing from Sarah that she was asking a lot of questions about him. He’s very aggressive with her, grabbing her arm and warning her to stay away and keep her mouth shut, and Callie gets out of the house (Mariana in tow) before anything bad can happen.

Meanwhile, the dinner party is awkward and Stef seems itching for a confrontation after what happened with Frank earlier. There’s some terse talk about restricting Lexi and Jesus’s privacy that nearly sets her off and Frank arrives uninvited, putting everyone on edge. He doesn’t take long in asking Jesus about the retreat and what he hopes to get out of it, forcing Stef to mention to Ernie and Sonia her concerns about the camp giving a negative impression of her family to her son. They assure her that they support her relationship with Lena completely (“what’s more Christian than family?”) and leave Frank out on an island as far as opposing same-sex marriage.

He insinuates that they’re not good Catholics for ignoring what the Bible says about homosexuality and Sonia responds that everybody picks and chooses passages that they integrate into their lives, otherwise they could sell their daughter’s hand in marriage to the highest bidder or she could be stoned to death for disagreeing with him. Jesus closes things out by saying that he doesn’t want to go to the camp if it will cause this type of tension and drama among his family and urges his mothers to believe in him and his ability to hold fast to his beliefs.

Right before he leaves to go home, Frank apologizes to Stef for forcing her to meet with the minister and for driving a wedge between her and God. She agrees to let Jesus go to the camp, which pleases him, and the two are back on okay terms. However, Callie brings an obviously tipsy Mariana home and doesn’t manage to get her up into bed without being noticed. Sonia invites the two to come and join them, but when Stef notices Mariana’s condition, she suggests that maybe they call it a night. Upstairs, Lena and Stef thank Callie for not drinking and getting Mariana home in one piece, while Callie sets a glass of water and some medication on Mariana’s nightstand before turning out the lights and crawling into bed. Once there, she receives a text from Wyatt complimenting her party pictures and a comment on Instagram from user “4underpar”.

The picture? The one of her tree that she shot before going to the party.

The comment? Mentioning that it’s the tree right below her bedroom.

Additional thoughts and observations:
-No Jude this week, although we did learn that he likes to sleep in. Perhaps he was passed out for much of this episode?
-I still don’t really know what to make of Wyatt. Cute, charming, and vulnerable underneath the layers of snark? Good. But the violence, the pouting, and trying to get Callie to blow off her therapy? Not so much. I will say that him cutting out a piece of the closet wall and taking it with him was incredibly touching and the most I’ve liked him since he first appeared on the show.
-I kind of feel like we’re heading for a Mike death sometime soon. The increased drinking, the pledge to work more, the need to be a hero to his son – if someone doesn’t step in, this won’t end well for anyone.
-Interesting that they didn’t make Lexi’s parents as staunchly conservative as one would expect, given how much their strictness and traditional views have been stressed thus far. It was nice seeing Frank apologize to Stef for sending her to a youth minister, though, so the dinner party scene was worth the price of admission, despite a non-starter of a gay marriage debate.
-Let’s all hope that some nice person escorted a pitifully inebriated Talya home before she did anything bad. The scene of Callie, Wyatt, and Mariana walking near the door and seeing her dancing in front of the guys with the cell phone cameras was incredibly sad, although I liked that we didn’t see the end result yet.
-Liam’s whole presence was creepy/unnerving, but the comment at the end sealed the deal. Also, we all think that he’s doing something with Sarah, right?
-Next week on The Fosters: Jesus and Mariana get into a major fight over what she did, while Callie opens up to Brandon about her past and Jude hopes to impress his new friend Connor.