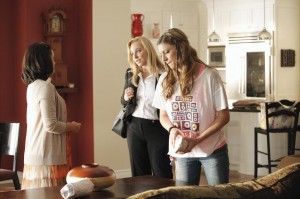 Backed into a corner, Savi felt like she had no choice but confess her infidelity to Harry. Although she could have held off on telling him about Dom until the results from the paternity test came in, once she found out she was in fact pregnant and hurting her baby with her heightened stress levels, she knew something had to be done to lift the weight of her secret from her shoulders. It was especially hard for her to mention something because of how good things had been going with her husband and how what she did would demolish any progress they had made in recent weeks. But, on the next episode of Mistresses, has Harry decided to take revenge against his wife in a bid to hurt her like she did him?

Now that he won’t even entertain the thought of their future as a couple, Savi’s begun having suspicions that Harry’s sleeping with the hostess at his restaurant. What part of this is grounded in fact and what part constructed in her mind remains to be seen, but this is exactly what she didn’t want to have to deal with and why she held off on telling Harry for so long. Now that he knows what she did with Dom, she’s going to be overanalyzing every move he makes and every word he says, thinking that he’s holding a grudge against her, cheating on her, or some combination of the two; Savi already felt an extreme amount of guilt at what she did that night at the office and it seems like that has manifested itself into a paranoia that will be hard to shake. Will she and Harry ever go back to the way they were before the confession?

Elsewhere on Mistresses, Karen fears that someone has broken into her office and may have accessed her patient files, while April’s new romance with Richard heats up and Joss’s professional life continues to suffer due to Olivier.

Do you think Harry would cheat on Savi or is she projecting? Who would have the motivation to break into Karen’s office? Will Joss try to seduce Olivier to get him off her back at work?