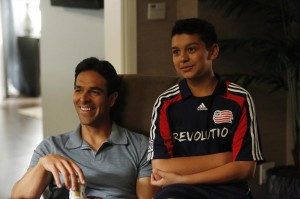 Knowledge of Danny’s home being raided by the police is bound to be spread around Green Grove, considering the tension running through the town as the result of his very presence. Right now, residents, especially those who were around when he was sent away for murdering his aunt, are going to be looking for any possible clue that he did it to confirm their suspicions and validate the opinions about him that they had already set. To the whole of Green Grove, Danny Desai isn’t a charming soccer player or a damaged young man looking for a sense of normalcy; he’s a deranged monster itching to satisfy his blood lust and they’re all in danger by him being allowed to walk freely among them. So, on the next episode of Twisted, that means Danny will hang back and avoid being seen in public unless he has to. Right?

Not quite. Danny’s thinking about going to the upcoming fall festival, spurred on by Jo’s suggestion that they attend despite what happened with the search. While it would be something that reminds them of old times and a way for them to get out in a relatively safe, controlled environment, putting themselves among the people who hate him might not be the best idea right now, as Green Grove isn’t exactly a comfortable place to be right. Danny might be able to win over people with his impressive athleticism, but he won’t have the chance to do so at the festival and we’ve already seen that his attempts at charming those around him have been decidedly hit or miss. It may be wisest to try and keep as low of a profile as possible for the moment; even though Danny deserves to be able to do the same things as everyone else, in a town like Green Grove, that just doesn’t seem possible – not with Regina’s murder still being unsolved.

Elsewhere on Twisted, Lacey reveals that she’s been having dreams about Regina and thinks about going to Gloria to ask about the necklace, while Mayor Rollins gets on to Kyle about the lagging investigation and Jo’s friendship with Rico is strained due to her connection with Danny.

Should Danny attend the fall festival? Where do you think Regina got the necklace? Will Rico and Jo be able to maintain their friendship in the face of everything that’s going on?