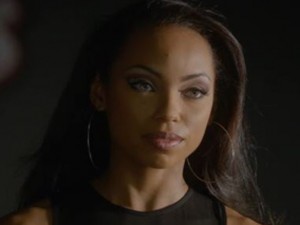 The auction last week on Hit the Floor threw Ahsha for a loop, as Sloane revealed the real reason that she left Pete upon getting pregnant and Derek allowed Jelena to put him down for an astronomical bid meant to win a dance from his favorite Devil Girl. Her plans of getting closer to Pete and discovering the other side of her family are put on, at least, a temporary hold, while this was the most forward of advances that the Devils star had made toward winning her over, made all the more awkward by being in front of her boyfriend. German seemed to take everything in stride during the event, but on the next episode of Hit the Floor, he shows that the sight of Ahsha with Derek got to him more than he let on.

Rather than keeping the $5,000 he saved for grad school, German has purchased a shiny diamond bracelet for Ahsha, but she’s not thrilled with his decision, particularly when he reveals that the gesture stems from the auction. Ahsha thought that her relationship was strong enough to withstand the threat of Derek Roman and while German has been understanding about her role in the Devils organization and the things that she’ll be expected to do in her position, the combination of Jelena letting it slip that Derek helped Ahsha at the calendar shoot and the auction dance has him feeling inadequate, to the detriment of his relationship. Will he manage to pull himself together and steady things with Ahsha? Or has Jelena landed her biggest blow yet against Ahsha, potentially ruining her relationship in the process?

Elsewhere on Hit the Floor, the power goes out at Devils Arena before a big game, leading to a major hookup, while Jelena is forced to face someone from her past and Pete reveals a secret to Raquel.

Should German be feeling insecure about what happened at the auction? Do you think Ahsha, even subconsciously, has a thing for Derek? What will Pete reveal to Raquel during the blackout?