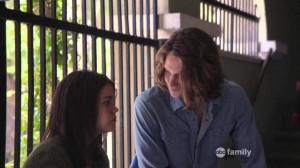 Callie made an important decision last week on The Fosters, as she avoided facing her attraction to Brandon when she ditched the end of Mariana’s quince and ended up hanging out with Wyatt on the beach. By leaving Brandon without talking to him, she gave herself some time before the inevitable awkward conversation they’ll have to have regarding their connection and sent a message that although there might be something between them, it can’t happen. For one, Brandon’s not exactly the kind of guy Callie thinks she deserves or should be with, but mostly, if they were to start something right now, it would put her (and Jude) in danger of being out of yet another home. Callie just isn’t ready to risk the first sense of stability she’s had in a long time over a guy, no matter how much she may like Brandon.

On the next episode of The Fosters, Callie has brought Wyatt around the family, who he makes a fairly good impression on – except for Brandon, who is worried about Callie dating a bad boy. However, it’s less about her being with someone who could potentially break her heart and more about her being with someone who isn’t him, only he doesn’t want to defy Lena and Stef by deliberately going behind their back and acting on his attraction to Callie. He may be exploring independence during his senior year of high school, namely the idea of moving in with his father and the break-up with Talya, but Brandon is still the same caring, thoughtful individual that he was before and he knows what would happen if things were to go too far. But can he keep his feelings for Callie bottled up? Or will he have to spill his guts to her and inform her of where his heart stands as of right now?

Elsewhere on The Fosters, Jude is bullied at school for being different, while Lena and Stef plan a date night when they find out a couple they know is breaking up over lack of romance, Jesus and Lexi are forced to face the consequences of their sneaking around, and Mariana attempts to join a new social crowd.

Does Brandon have a right to be jealous of Callie’s new relationship, even though he’s been warned about the “no dating” rule that foster siblings must adhere to? Will Lena and Stef manage to carve out the time necessary for a romantic date night? How will the family handle finding out about Jude being bullied?