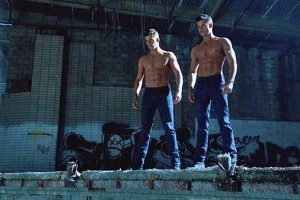 his week on TVHackr, we talked about the cancellation of Zach Stone Is Gonna Be Famous, best case scenario Emmy possibilities, and Starz”s upcoming adaptation of Outlander, while the internet touched on baby names ruined by television, the impact of binge watching, and blistering insults on a beloved HBO comedy.

Magic City Season 2 Recap: Bury Them Up to Their Necks
While Ike begins putting his plans for Cuba and the Miramar into motion, Ben receives a visit from Chicago mob boss Sy Berman and Stevie gets involved in an altercation with Bel while out with Lily.

Family Tree 1.06 Preview: Tom Goes to a Civil War Reenactment
Still out in California, Tom is exposed to the world of reenacting when he accompanies Rick to a Civil War battle in Redondo Beach, where he finds out more information about Charles and Virginia Chadwick.

2013 Emmy Dream Ballot
Who should be nominated for Emmys this year? We put together a ballot of personal choices that has some surprises and some familiar faces.

Devious Maids Series Premiere Recap: I Think You Should Get a New Dream
Four Beverly Hills maids are shocked when another maid they know is murdered during a high society event at her client”s home. But who is the one that did her in?

Devious Maids Spoilers: Marisol Tries to Spend More Time at the Powell Home
Coming up on Devious Maids, Marisol tries to spend more time with Adrian and Evelyn, while Carmen takes advantage of an opportunity with Odessa gone and Zoila reveals a secret about her past to Valentina in hopes of persuading her not to pursue Remi.

The Fosters 1.04 Sneak Peeks: Mariana Celebrates Her Quinceanera
It”s Mariana”s 15th birthday, but the real action is off the dance floor, where secrets are exposed and relationships are tested.

Twisted 1.03 Sneak Peeks: Chief Masterson Goes After Evidence Against Danny
While Kyle is willing to do whatever he has to in order to find the photo of Tara, Jo comes out of her shell, to the chagrin of Rico, and Danny attempts to make peace with Archie.

MTV Announces Comic-Con Lineup, Including Teen Wolf Panel
Teen Wolf returns to Comic-Con for a sure-to-be raucous panel and MTV plans to have a weekend-long live stream, a party in the park, and a booth to celebrate the first publication from MTV Comics.

The CW Announces Fall 2013 Premiere Dates
When will the latest seasons of The Vampire Diaries, Supernatural, and Arrow premiere this fall? Find out here.

The Fosters Recap: I Know That I’m Beautiful
Lena has a confrontation with her mother thanks to Mariana”s party bringing up certain issues, while Brandon breaks up with Talya and Jesus is bound and determined not to let Lexi go.

Starz Orders Outlander Adaptation to Series
The series, which will have a first season of 16 episodes set to premiere in 2014, is based on Diane Gabaldon”s seven-novel series of the same name.

NBC: Watch the Series Premiere of Siberia Here
NBC has put the first episode of upcoming drama Siberia, about a reality show taping gone wrong, up on its website ahead of the show”s July 1st premiere.

Ryan Bingham Releases Theme Song to FX’s The Bridge
Get a listen to the theme song from FX”s upcoming crime thriller The Bridge, written and performed by Oscar winner Ryan Bingham.

Twisted Spoilers: What’s the Significance of the Necklace?
Coming up on Twisted, the necklace comes more into play and Danny and Archie can”t seem to coexist on the soccer team.

Zach Stone Is Gonna Be Famous Canceled by MTV
MTV has pulled the plug on the Bo Burnham comedy, which debuted in May and documented a recent high school graduate looking to become an instant celebrity thanks to his own reality series.

FOX Announces Fall 2013 Premiere Dates
When will the next seasons of Glee, New Girl, and Bones premiere this fall? Find out here.

The CW to Encore Fall Launches on Fridays
For two Fridays in October, The CW will air encores of its new fall series in hopes of attracting extra eyes and exposing them to a new audience.

Comic-Con 2013: Syfy, Adult Swim, CBS Studios Announce Lineups
Among the series coming to Comic-Con are Defiance, Being Human, Adventure Time, Under the Dome, and Bates Motel.

See Veep“s Most Vicious Jonah Putdowns (Vulture)
Vulture gathered the most scathing of insults that were lobbed at White House staffer Jonah this season on Veep.

(The Huffington Post)
Need help in figuring out what to watch on Netflix? Turn to Netflix Max, a new way of finding material best suited for your taste.

Indian TV reporter fired after filing flood report from the shoulders of a local victim (The Washington Post)
You have to see this to believe it.

TV binge-watching is a mostly harmless addiction (Today)
Worried that you binge too much television? According to a recent study, it doesn”t have the negative impact that you might think it does.

Watching TV may not be bad for kids after all (MSN)
Worried about letting your children watch television? According to a recent study, television can actually help children in multiple ways.

Eight Baby Names Ruined by TV Characters (Rolling Stone)
Thinking of naming your baby Enoch or Gustavo? Considering the reputation those names have garnered through infamous television characters, you may want to think again.

The Night Tony Soprano Disappeared (GQ)
After the passing of James Gandolfini, GQ looks back at a pivotal event in The Sopranos development and the impact that the show had on HBO.

Why Television Is Better Now Than Ever Before (Complex)
Complex Magazine has decided that television is at its peak right now. But why do they feel that way? And do you agree?

The Trajectory of Television—How the Internet dust-up will settle (ARS Technica)
Just where is television heading? ARS Technica looks at the advancements, improvements, and disappointments that could be in store.