On the heels of Under the Dome“s surprise success, CBS has released a list of rules the series will be governed by, including the lack of Wi-Fi/television/phone calls inside the dome and just how permeable the dome is. The series airs Mondays at 10:00, while the pilot is set to be rebroadcast on Sunday, June 30th at 9:00 following Big Brother. 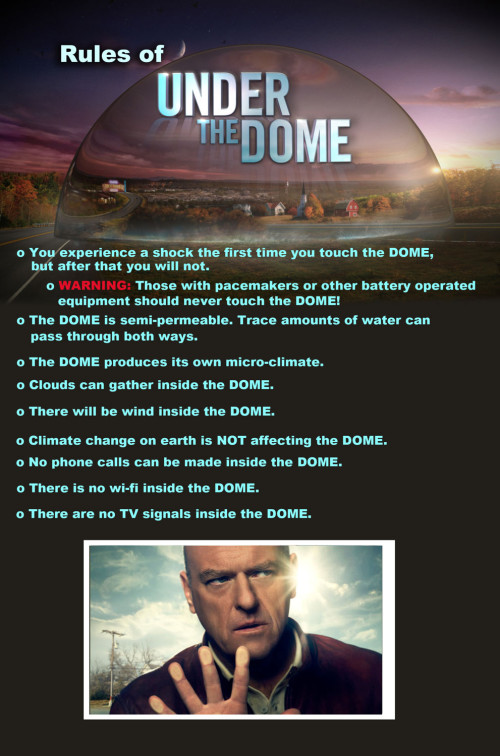 -Academy Award nominee Maggie Gyllenhaal has signed on to star in Sundance Channel”s original mini-series The Honourable Woman, where she”s the first official casting announcement. The thriller, written by Hugo Blick and set to premiere in 2014, is set against an international political backdrop and features Gyllenhaal as the daughter of a Zionist arms dealer who assumes his business and uses those resources to better the area between Israel and the West Bank. Her appointment to the House of Lords, meanwhile, causes a political maelstrom.

-Brian Austin Green has been tapped as a series regular on Anger Management, per The Hollywood Reporter. He”ll be reprising his role as Jen”s boyfriend and will act as a foil for Charlie.

-Ahead of its July 11th premiere, Orange Is the New Black has been renewed for a second season by Netflix. The next 13 episodes in the journey of imprisoned Brooklynite Piper Chapman will begin production later this year for a 2014 debut. The series stars Taylor Schilling, Laura Prepon, and Jason Biggs. You can check out a trailer for the dramedy here.

-Gail O”Grady and Michelle Harrison are set to star in The Mystery Cruise, a two-hour backdoor pilot for Hallmark Channel based on “The Santa Cruise” by New York Times bestselling authors Mary Higgins Clark and  Carol Higgins Clark. The series would follow lottery winner Alvirah Meehan (O”Grady) and her best friend Regan Reilly (Harrison), a private investigator, as they team up to solve crimes.

-Fourth of July weekend will find the first three seasons of The Walking Dead being replayed on AMC, beginning at 1:00 p.m. on July 4th. The marathon will be hosted by director Kevin Smith and feature interviews with cast and crew, as well as behind-the-scenes footage from season four, currently in production. The 4th will find season one played twice, once in black-and-white, while season two will play on the 5th and season three will be split up between the 6th and 7th.

–Happy Endings is officially dead after three seasons, according to Deadline, as the former ABC comedy”s cast options expire this weekend and producer Sony TV finally called it quits in finding a new home for the show.

-Beginning August 4th, Discovery”s annual Shark Week will feature several new programs, including late-night talk show Shark After Dark and Shark Cam, a robot submarine that is used to track sharks in a new and exciting way. Also included is the first time real shark attack footage captured by eye-witnesses, which will premiere during I Escaped Jaws.

-Ovation has acquired the rights to both seasons of Smash and will begin replaying the troubled NBC production on Friday, July 19th at 8:00. Season two will premiere in the same timeslot in November.

-ABC will rebroadcast the first episode of murder mystery reality-competition series Whodunnit? on Saturday, June 29th at 10:00. The show airs Sundays at 9:00.

-Could David Bowie be heading to Hannibal? E!Online that creator Bryan Fuller wants to get the rock star on board for a second season arc. But who will he be playing and how will he fit into the Hannibal-verse?

-OWN has ordered an additional 16 episodes of Tyler Perry drama The Haves and Have Nots, bringing its first season episode total to 32. The show”s current 16-episode cycle will air through September 3 with the new episodes  premiering in early 2014. There”s been no word yet on any additional episodes for comedy Love Thy Neighbor, the network”s other attempt at getting into the scripted programming game.

–Breaking Bad‘s Aaron Paul and House of Cards’ Kate Mara have been tapped to announce the 65th Annual Primetime Emmy Awards nominations on Thursday, July 18. Paul is a two-time winner for Outstanding Supporting Actor in a Drama.

-Netflix will debut Mako Mermaids, a sequel to H20 – Just Add Water, on July 26th, when all 13 episodes will be made available. Following on where H2O – Just Add Water left off, mischievous teen mermaids  Lyla, Nixie and Sirena, guardians of Mako Island, fail to stop 16 year old boy Zac from falling into the sacred Moon Pool and becoming a Merman.