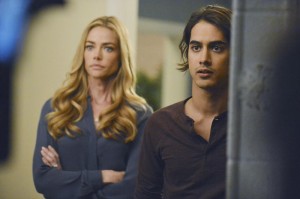 Chief Masterson can’t seem to let go of the idea that Danny is the one responsible for killing Regina. While he was slightly softened up in his ardency when Jo informed him how much she believed her friend was innocent, Tess offhandedly telling him of the mysterious Tara photo that vanished mid-dinner party has made him believe now, more than ever, that his initial suspicion was correct and that Danny is a two-time murderer. However, the only evidence he has right now is the text from Regina, which could theoretically have been sent from anyone, and until he finds something that puts Danny at Regina’s house at the time of the murder, he doesn’t have a case.

On the next episode of Twisted, Chief Masterson arrives at the Desai home again to see if Karen will let him inside, only she’s not exactly willing to after the disastrous dinner they had. In acting the way he did toward Danny, Kyle made gathering evidence that much harder, not only because of the remarks he made, but in getting himself caught looking through Danny’s belongings. There’s no way that either Karen or her son will let their guard down around him now and unless he manages to stumble across a piece of evidence elsewhere, find something out while taking statements about the night of the party, or sneak into the home without the Desais knowing, he might be out of chances to put Danny away for good.

Elsewhere on Twisted, Jo disappoints Rico by breaking away from her anti-social routine, while Danny seeks out an opportunity to reconnect with Lacey. But will she listen to what he has to say or, for that matter, allow herself to be seen in public with him?

Is the photo of Tara wearing Regina’s necklace the only piece of evidence out there that could convict Danny? Do you think Jo’s new attitude is less about wanting to fit in and more about entrenching herself in the popular crowd to find out information about the party? When will Lacey decide to forgive Danny and let him back into her life?