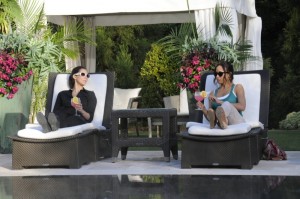 Now that she’s gotten inside the Powell home for the first time, Marisol is determined not to lose her in at gathering the evidence needed to exonerate her son. It won’t be that easy, though, since Adrian is already onto the face that she’s not simply a maid, something that could very easily lead to her cover being blown if she’s not careful. However, Marisol can’t afford to go back now, not when her son is sitting in jail, so coming up on Devious Maids, she continues looking for any chance she gets to go to the Powell home. Will anyone catch on to what she’s doing and why she’s so interested in being with Evelyn and Adrian?

Sunday, June 30th -“Setting the Table”
Zoila gets irritated when Valentina tries to get closer to Remi; Spence accuses Peri of cheating; Carmen takes advantage of Alejando and Odessa being out of the house; Marisol tries to figure out a way to spend more time at the Powell house.

Sunday, July 7th – “Wiping Away the Past”
Michael’s ex-wife reveals a shocking secret about Taylor’s past; Adrian tries to cheer up a recently divorced friend; Valentina and Genevieve attempt to get Remi to see Valentina as more than just a friend; Spence offers to help Rosie out of a bind; Carmen secures a meeting with a major music producer.

Sunday, July 14th – “Making Your Bed”
Genevieve’s brother returns and complicates life for Zoila because he once broke her heart. Meanwhile, Rosie vows to help Spence with his marriage; Marisol works a fund-raiser at the Powell house in order to uncover more information on Flora’s murder; and Alejandro allows Carmen to be a guest at the party he is hosting while Odessa works in her place.

Devious Maids airs Sundays at 10:00 on Lifetime. You can check out a recap of the series premiere here.

Will Marisol be able to find out anything in her brief trips to the Powell home? Should Zoila stand in the way of Valentina making an attempt to be with Remi? Is the meeting Carmen gets with the producer going to result in advancement for her singing career?