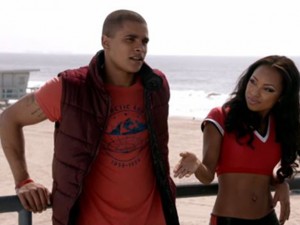 Jelena Howard has done her best to mark her territory during the first four episodes of Hit the Floor. The Devil Girls captain does not want Ahsha to stay on her squad and will resort to just about anything in her bag of tricks to make that happen; nothing is too immoral, indecent, or conniving for her at this point and thus far, she’s spilled the beans about Pete, tried to psyche her out with the sexy calendar photo shoot, and done her best to make the atmosphere at any team event as awkward as possible. While all of that has bruised and battered Ahsha’s ego, one of the newest Devil Girls is still standing, so it’s time for things to kick into high gear, thanks to a little something Jelena saw on camera.

On the next episode of Hit the Floor, German has come by a Devil Girls event at the Santa Monica Pier and meets Jelena for the first time. As a peace offering, since she knows that Ahsha’s told him everything, she brings Derek over and introduces the two men, making a point to note that German is Ahsha’s boyfriend. Jelena’s thinking is that if she can’t get Ahsha knocked off the team, she’ll do her best to make the girl’s personal life as miserable as possible; she knows that Derek’s taken a liking to her and by introducing him to German, she’s helping to create a toxic love triangle that could implode Ahsha’s relationship.

Elsewhere on Hit the Floor, Ahsha demands answers from Sloane at a formal party and walks away when her mother doesn’t begin explaining the choice she made not to tell her about Pete.

Will German get wind of Derek’s attraction to Ahsha? Is Ahsha right in freezing Sloane out for not providing answers about Pete? Should Sloane finally swallow her pride and fill her daughter in on everything she wants to know about her father?