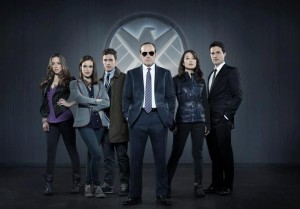 ABC has announced the three series that it will be sending to 2013 San Diego Comic-Con, which begins July 18th – Joss Whedon’s Agents of SHIELD, third season drama Once Upon a Time, and Once‘s spin-off Once Upon a Time in Wonderland, starring Sophie Lowe and Michael Socha.

Agents of SHIELD will be having its panel, featuring Whedon and Marvel’s Head of Television Jeph Loeb, on Friday, July 19th, while also being featured heavily at the Marvel Entertainment Booth all weekend. Meanwhile, Saturday, July 20th sees both Once Upon a Time and Wonderland being spotlighted, thanks to autograph sessions, panels, and press interviews featuring the casts of both shows. Fans of the show will also be able to ride in several ABC branded pedicabs made to resemble the likes of the Evil Queen’s carriage, The Jolly Roger, and Alice’s magical mushroom.

ABC’s three shows will join Twentieth Century’s 11 series, including Sons of Anarchy, Sleepy Hollow, and Bob’s Burgers, as well as Starz’s pirate drama Black Sails, in heading to the convention. Details for all, including times, panel locations, panel activities, and special guests, will be announced at a later date. Also to be announced are the shows that will be coming to the convention from other networks, as the likes of Syfy, NBC, and The CW have yet to reveal any details about their Comic-Con plans for this year. Expect announcements from them, and several other networks, in the coming weeks.

The 2013 edition of San Diego Comic-Con runs from July 17th (a preview night) through July 21st. You can check out ABC’s 2013 fall schedule here, as well as trailers for all 12 of its upcoming new series here.

Will you be attending Comic-Con this year? What do you most look forward to about the Agents of SHIELD, Once Upon a Time, and Wonderland panels? Which other shows would you like to see appear at the convention?