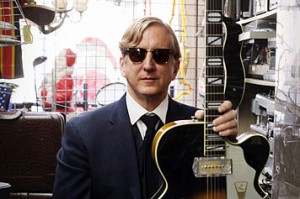 According to The Hollywood Reporter, Nashville‘s executive music producer (and husband to creator Callie Khouri) T Bone Burnett won’t be returning for the show’s second season. The reason given is the Grammy winner’s extensive slate of film, television, and recording projects in the works. Taking over the reins will be Buddy Miller, who was Burnett’s second-in-command and helped the producer guide the music-heavy drama into producing two soundtracks for its first season. Nashville returns this fall on ABC.

-Disney Channel has ordered comedy I Didn’t Do It to series. Starring Olivia Holt and Austin North, the show follows fraternal twins who have to navigate the horrors of their freshman year of high school along with four best friends. I Didn’t Do It also features Piper Curda, Sarah Gilman, and Peyton Clark.

-Lifetime’s The Client List wrapped its second season on June 16th and is currently in limbo as to its future on the network. While ratings are down, the reason for the delay is a difference of opinion regarding how the show would handle Jennifer Love Hewitt’s pregnancy. Creator, executive producer, and star Hewitt is three months pregnant with co-star Brian Hallisay’s baby and she wants the show to write his character Kyle to be the father of her character Riley’s child. However, Lifetime is said to prefer Colin Egglesfield’s character Evan to be the father and the two are currently at an impasse.

-This summer’s edition of Big Brother will have two major twists, as three houseguests will be up for elimination rather than two and viewers will play a bigger role in the game with the introduction of the MVP vote. Each week, the audience casts votes for the player they feel is playing the best game, which gives them secret power that will be revealed in the June 26th season premiere.

-Liv Tyler has joined the cast of HBO’s The Leftovers, based on the Tom Perrotta novel of the same name and created by Lost‘s Damon Lindelof. Tyler, who has yet to appear on series television, joins previously cast Justin Theroux and Michael Gaston and will play Meg, a young woman on the verge of getting married but needing an escape.

-Due to the impending release of Sofia Coppola’s The Bling Ring, E! has announced a Pretty Wild marathon of episodes that focus on the alleged involvement of Alexis Neiers in a string of celebrity robberies. The four-episode marathon begins Friday, June 21st at 1:00.

1:00 PM: “The Arrest”
Emerging as Hollywood’s newest stars, sisters Tess, Alexis and Gabby are  ready to take the City of Angels by storm.  In the season premiere of Pretty Wild, sexy sisters Tess and Alexis land a huge modeling gig, but a knock on  their door early one morning will change the life of one sister forever.

1:30PM: “The Hearing”
With her freedom on the line at a preliminary hearing, Alexis faces charges  of allegedly committing a burglary targeting celebrity homes. Meanwhile, Tess is  ecstatic when she is invited on a date with a pop superstar and Gabby’s world is  rocked when Andrea announces that the whole family is making a big move.

2:00 PM: “Vanity Unfair”
Alexis gets the opportunity to finally tell her side of the story in an  interview in Vanity Fair, but the article doesn’t quite turn out the way she  expected.  At Andrea’s suggestion, Gabby goes job hunting and Tess is determined  to find out just where her relationship with rocker Max stands after he didn’t  respond to any of her texts while in Cabo.

2:30PM: “And So It Is”
Alexis struggles with the stress of her impending trial and finding out  that celebrity superstar, Orlando Bloom will be testifying against her in court.  She begins to unravel as she questions her decision to go to trial or take the  plea deal. The rest of the family tries to cope, but the court case begins to  affect Tess’ relationship with Max.

-There will be new Parks and Recreation merchandise for fans of all things Pawnee to indulge in, as NBC will be unveiling the following additions to the show’s catalog of items: collector’s trading cards, available in June in five-card packs with a second edition set for December; Leslie Knope and Ron Swanson posters and bookmarks, available this summer; Ron Swanson Halloween mask, costume, and talking bobblehead doll, all available in the fourth quarter of the year.

-HBO has released a teaser for True Detectives, its upcoming drama starring Woody Harrelson and Matthew McConaughey as two detectives whose lives intertwine during a nearly two decade-long hunt for a serial killer in Louisiana. No premiere date has been announced yet.

-AMC has released a teaser for Low Winter Sun, its upcoming cop drama starring Lennie James and Mark Strong. The series is set to premiere Sunday, August 11th at 10:00.

-Check out Magic City creator Mitch Glazer’s thoughts on the season premiere of the Starz period drama. You can read about the episode here.