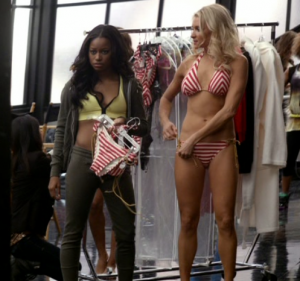 Ahsha managed to keep her spot on the Devil Girls when she came clean to Olivia about the real reason she bailed on the opening home game, but even with the head of the squad in her corner, she can’t afford to keep making a scene or acting in such a way that Olivia has to accommodate her specially. If it looks as if she’s getting preferential treatment, it could lead to her being ostracized and her time as a Devil Girl being a less than pleasant experience, not even including the fact that Jelena’s wanted her gone since the first time they met. On the next episode of Hit the Floor, Ahsha comes across her latest challenge in her new career path, something that she’ll have to overcome and excel at in order to impress the squad, soothe Olivia’s mind, and show up Jelena.

It’s time for the annual Devil Girls calendar shoot, meaning that there’ll be 14 scantily clad dancers prowling in front of the camera looking to create a shot that makes them shine. Which they’ll be doing while in a string bikini. While Kyle plans to do everything she can to stand out from the pack, Ahsha is uncomfortable with the idea of wearing something that revealing and having to “perform” in front of the camera. But this isn’t the time for her to make a grand stand and draw even more attention to herself; for her stint as a Devil Girl to get on the right path, she needs to put her head down and try to assimilate as best as possible in situations like this, only shining when out on the floor and in front of the crowd. If she doesn’t, her presence on the team may prove too much of a distraction and she might end up out of a job by the end of the season.

Elsewhere on Hit the Floor, Pete and Sloane confront their past, while Olivia looks into Mia’s disappearance and Jelena sets her next plan to trip up Ahsha into motion.

How will Jelena attempt to make Ahsha look bad at the calendar shoot? Will Ahsha get over her shyness and show out in front of Olivia? What’s your theory about what happened with Mia’s disappearance?