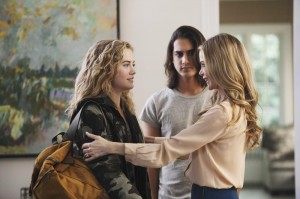 Even though we’re only one episode into the run of ABC Family’s Twisted, Jo has already experienced quite a range of emotions about the return of former best friend Danny after he finished serving his five-year juvenile hall sentence. Before seeing him, she was dismissive and referred to him as a “lunatic freak” and their first interactions were filled with the tension that years of absence and a stolen childhood had wrought; however, by the end of the episode, Jo saw that there was still a little bit of the boy she once knew in Danny and that he might not be the unrepentant murderer that everyone in town thinks of him as. Unfortunately, she’s the only person who came to his defenses after Regina was found murdered and now, she’s become nearly as ostracized as him.

On the next episode of Twisted, Jo and Danny try to set up a dinner between their two families that fails to get off the ground and end up clashing themselves when he gets into a physical fight at school. Jo took quite a chance in standing up for him during the assembly and he doesn’t seem to notice that, as he only makes himself a bigger target by refusing to keep a low profile. Couple that with her frustration over his inability to provide her with a reasoning for killing his aunt and refusal to use Lacey as his alibi and Jo doesn’t know if she can continue to support Danny in the way that she would like. She seems to be ready to start forgiving him for everything that happened and the pain that he caused her, but she can’t do that if he won’t meet her halfway and provide her with the confidence that she’s not making a huge mistake by trusting him.

Elsewhere on Twisted, a grief counselor is brought into Green Grove to help with students who are shaken up by the loss of Regina, while Lacey struggles with her feelings and has to deal with a former frenemy who tries to make Regina’s death all about her.

Twisted airs Tuesdays at 9:00 on ABC Family. You can check out spoilers for the next two episodes here.

What did you think of the series premiere of Twisted? Will Lacey eventually come around and provide Danny with an alibi for the night of Regina’s death? Could Danny have snuck out of his home and killed Regina while Lacey was asleep?