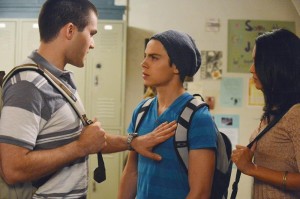 The Foster home has gotten even more crowded with the addition of Callie and Jude, but not everyone is happy with the arrangement. Jesus and Mariana are annoyed that they have to give up some of their personal space to accommodate their guests, while Brandon is feeling the tension from his siblings and doesn’t appreciate the lack of privacy he has, especially when it comes to the bathroom. Although he loves the twins, Brandon has already had to get used to his house filling up once, so to be forced to deal with it again this close to leaving for college is something he didn’t expect. But on the next episode of The Fosters, he’ll be confronted with an option that could give him more privacy – at the expense of his relationship with Lena and Stef.

While at the batting cages, Mike suggests that Brandon move in with him; in theory, it’s something that makes sense. Brandon living with Mike would give them the time to bond and lessen the pressure on Lena and Stef, while also giving the other kids more space. However, you have to wonder if this is less Mike wanting to be a good dad and accommodating to Lena and Stef and more him wanting to needle Lena, reminding her that she’s not Brandon’s biological mother or father and that there’s a third parent in Brandon’s life. There’s obviously no love lost between the two and this is a way for him to passive aggressively irritate her without necessarily coming across as the bad guy to Brandon and Stef. Is there a chance that Lena and Stef actually let Brandon move out and be with his father? Or is the suggestion about to cause an even bigger riff between the Fosters and Mike?

Elsewhere on The Fosters, Jesus denies his interest in Lexi to Mariana even though the two are continuing to see one another, while Callie begins looking into her dark past thanks to an assignment from Timothy.

The Fosters airs Mondays at 9:00 on ABC Family. You can check out recaps of the first two episodes here and here.

Should Brandon move in with Mike? What will Callie have to confront in order to complete the assignment? When will Mariana figure out that Jesus and Lexi are still seeing one another?