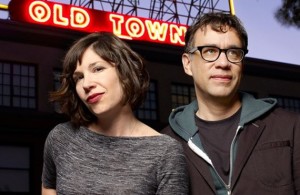 IFC has announced that sketch-comedy series Portlandia has been renewed for two additional seasons, each set to consist of 10 episodes and premiere in early 2014 and 2015, respectively. The series stars Fred Armisen (Saturday Night Live) and Carrie Brownstein (Sleater-Kinney) in a multitude of roles that provide social commentary and trend toward satire. Characters on Portlandia include feminist shopkeepers Toni and Candace and overly eco-conscious couple Peter and Nance.

Among the guest stars that have stopped by Portlandia during its run are Kyle MacLachlan in the recurring role of the Mayor of Portland, Chloe Sevigny, and Jeff Goldblum. Other guests have included Roseanne, Rose Byrne, George Wendt, Martina Navratilova, Aimee Mann, Sarah McLachlan, Aubrey Plaza, and Patton Oswalt.

Since its 2011 debut, Portlandia has been the subject of critical acclaim that has since transitioned into awards attention, as the show was honored with a Peabody Award, a WGA Award, and an Emmy. Last September, the show made it into the Outstanding Directing and Outstanding Writing categories for Variety Series at the Emmys, a sign that its support has only continued to grow and might do so this coming year. With the vote of confidence from the network, that traction has a potential to result in further awards attention and even more accolades meant to boost its profile.

The cornerstone of the growing IFC alternative comedy lineup, Portlandia joins the likes of Out There, Maron, and Comedy Bang! Bang! on the network, the latter of which is set to premiere its second season on Friday, July 12th at 10:00. Maron, created by comedian Marc Maron, is currently airing on Fridays.

Will you be watching Portlandia next season? Do you think the show deserves this type of vote of confidence? Who would you like to see guest star during season four, excluding those who have already appeared on the show?