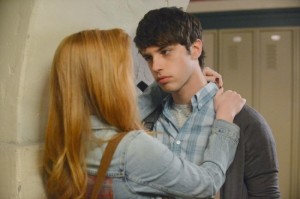 It’s another morning at the Foster house and while Lena and Stef have decided that Brandon will receive no punishment for running off with Callie, seeing as how he’s not a troublemaker and understands the ramifications of what he did, Jesus avoids taking his pill to cover for Mariana. He’s a little jumpy without having it, but he’s able to play it off around his moms and make it to school without drawing much suspicion. Once the kids are at school, Lena and Stef meet with Bill to hear more about Callie’s life, which includes losing her mother at age 10 and never staying more than six months in one home. However, despite learning her history, they’re both having concerns over bringing another teenager into their home, let alone the responsibility of raising a child Jude’s age again. Additionally, Bill takes the blame for what happened the other night; he had to tend to another case and couldn’t be around to connect Callie with Jude, something that would have avoided the entire messy incident.

At school, Mariana’s friends Kelsey and Lexi try to console her about what happened with Ana , citing the fact that now Mariana doesn’t have to invite her birth mother to her upcoming quinceaneara, while Talya can barely conceal her jealousy over Callie, even despite her parents being gone that weekend and planning to hang out with Brandon. Timothy brings Lena a note he found wadded up near the garbage that mentions something about pills and a locker search is thus ordered, causing Mariana and Kelsey, one of the girls she told to, to sweat out a possible punishment. Fortunately for the both of them, security only manages to find an ibuprofen bottle in Kelsey’s locker and they’re both spared a potentially severe reprimand, though Mariana continues to live with the guilt.

While at work, Stef and Mike talk about what happened with Brandon and he reacts badly to finding out that they didn’t punish him for skipping the music competition and nearly getting himself (and Callie) killed. Mike thinks that Brandon should have been grounded and talks over Stef once she alludes to Lena being the one in charge of the punishment and responsible for how it played out. He comes over later that evening and Stef tells Lena that she thinks he has a point about Brandon taking responsibility for what he did. While Lena feels incredibly undermined by Stef’s about-face and Mike’s pointed reminder that he and Stef are Brandon’s father and mother, Brandon is upset that he’s ended up grounded for a week for trying to help Callie rescue her brother. He asks his father when did he start to care, apart from 5 minute phone calls, and storms back upstairs.

Jesus intervenes when a guy won’t leave Lexi alone and gets into a fight that sends him to Lena’s office, where she expresses surprise/dismay at him becoming violent. Noticing his shaky leg and lack of concentration, she asks him if he took his pill today and he says again that he did, rejecting the idea of going to another appointment with his doctor. Meanwhile, Brandon and Callie spend lunch together in the music room where she asks him how he knows who he is if all he does is follow the rules, he regales her with the time he stole a (Matchbox) car (at age five), and Talya oversees him putting his hand on Callie’s leg.

Once at home, Mariana tries to apologize to Jesus and urges him not to skip his pills, which he responds hostily to, while Callie deflects questions from Jude about how long they’ll be in their current home and Lena rebuffs Stef when she attempts to make amends for what happened with Mike. Stef then goes to Brandon and reminds him that he needs to do the right thing by his father, who she claims is a good man and a good father, and Lena is taken aback both by Jude’s inquiry regarding the chores she wants him to do and the boy’s reaction to hearing that she and Stef aren’t legally married but married in their hearts. Later, the Fosters have a family meeting where Lena and Stef declare that they won’t be providing Callie and Jude with a permanent home, but they’ll house them until Bill uncovers a place for the siblings to go. They claim that they want their home to be the final pit stop for the two and until Bill comes up with an ideal situation, they’ve ordered beds for Callie, who will move in with Mariana, and Jude, Jesus’ new roommate.

The following day at work, Mike tells Stef that he doesn’t want to be a half-ass parent anymore and that he regrets how easy it was to hand Brandon off to her and Lena, who are extremely involved and loving parents. At school, Talya invites Callie to come sit with her friends at lunch after Mariana’s group turn out to be fixated on the whole juvenile hall thing. After lulling Callie into a false sense of security with awkward compliments and small talk, she makes a point to ask how long the newest member of the Fosters will be around and mention that Stef buys her and Brandon condoms, the first to make clear that she’s counting down the days until there’s no more Callie and the second marking her territory to discourage any further friendliness between the two. Jesus and Lexi, who kissed the previous night, have another flirty encounter by the lockers, while Kelsey snorts some of the medication she got from Mariana in the bathroom – while Lena was still in there. However, Kelsey doesn’t put the blame on her friend. She points the finger at Callie instead.

Lena and Stef confront Callie about the allegation and while she does deny it, she doesn’t go out of her way to defend herself, seeing as how she thinks they wouldn’t believe her anyway. Jesus tries to get Mariana to confess and keep Callie in the house, only to jump in at the last minute and confess himself, citing that the ADD pills made him feel like a freak and he only gave some to Kelsey after she heard how they helped his grades. Lena and Stef apologize to Callie for not believing her, which she accepts, while Lexi texts Jesus about what he did, Brandon blows off a night with Talya to play music with Callie, and Lena and Stef make up after their earlier tension.

Additional thoughts and observations:
-I know when I’m extremely late for something, I tend not to have full sit-down breakfasts, so the we-only-have-15-minutes-left-hey-pancakes scene was strange. Hopefully they live right beside the school, otherwise everybody will have to swallow those (burnt) pancakes whole in order to make it on time.
-What do you think about the title sequence? I thought it was good – better than Bunheads and The Lying Game but not as good as Pretty Little Liars.
-I figured last week that Talya was insanely jealous and it looks like we didn’t have to wait long for it to manifest itself into passive aggressive lunchtime conversation. With Brandon avoiding her call at the end of the episode, this conflict isn’t going anywhere and I think he’ll have to make a choice between the two girls.
-Jesus thinks Callie’s hot. Vaguely incest-y or not a problem?
-Mike’s kind of a turd. I get his concerns about wanting his voice to be heard and to not be shut out of parenting his child, but he shouldn’t get a say in what happens in Lena and Stef’s house. If they were putting Brandon in danger or actively mistreating him, of course, Mike should intervene; here, though, he just overstepped his boundaries, which is ironic considering he doesn’t think Lena and Stef give Brandon any of his own.
-Did you laugh at Stef’s comment about Lena getting Brandon heroin? Because I did.
-On that note, I like that they’re not painting Lena and Stef as some saintly lesbian couple but as two very real human beings with flaws (Stef vacillates between being a hardass and a pushover; Lena clams up rather than talking conflict out) and a relationship that’s a living, breathing thing that continues to evolve.
-Kelsey’s a hot mess. If you’re going to snort drugs in the school bathroom, why are you doing it when there are other people around you?
–Next week on The Fosters: Mike asks Brandon to move in with him, Mariana and Jesus clash over his feelings for Lexi, and pieces of Callie’s past are brought up in an assignment from Timothy.