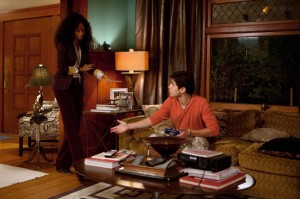 While Lena and Stef were busy trying to save Callie and Brandon last week on The Fosters, Jesus was confronting Mariana about the missing pills, which turned out to be sold so she could make money – to give to their birth mother, Ana. However, before they could have a blowup over what happened and the fact that Mariana lied about not wanting to meet Ana, Jesus’ stance on the topic softened as a result of Mariana’s time with their mother not going so well. Rather than catching up with her daughter or reminiscing about what time they did have together, Ana seemed to only be concerned about getting the money and getting out of there, crushing Mariana’s hopes of sparking a connection with the woman who gave her up all those years ago.

On the next episode of The Fosters, Jesus has opted to cover for his sister and not turn her in for selling a good portion of his pills, even if it means not taking them for a while and letting the time catch up to the number of pills he lost. The bottle was new, so he’ll be going without for a decent amount of time; while this is a noble enough gesture, not wanting to kick Mariana while she’s obviously down and out, Jesus has to think about himself here and the effect that not taking his pills will have on his body chemistry and general disposition. Is saving his sister from a likely severe punishment worth what he’s about to go through, especially the changes in behavior and temperament?

Elsewhere on The Fosters, Lena and Mike clash over Brandon’s punishment for running off with Callie, while Mariana is plagued by guilt over letting someone take the fall for something she did and sharing space proves to be difficult with two additional children in the Foster household.

The Fosters airs Mondays at 9:00 on ABC Family. You can check out a recap of the series premiere here.

Who will Stef side with over Brandon’s punishment: Lena or Mike? Will Mariana confess to what she did, if only to help her brother and get the heat off of Callie? Is Talya genuine in her friendliness to Callie or is there more to her feelings for the new girl than meets the eye?