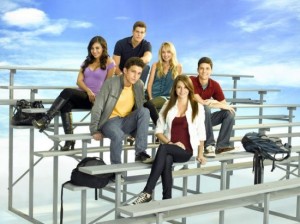 When The Secret Life of The American Teenager first aired five years ago, there wasn’t a lot of choice on the network. ABC Family was hardly a network to be reckoned with, and certainly not leading the social media fight on various nights of the week as it does now. The show offered something a little different, for a target audience of young girls by the creator of 7th Heaven, Brenda Hampton. We could only surmise that the message was about sex and that Brenda would have some great life lessons for young people to learn along the way.

Instead, the secret was there wasn’t a secret at all. Amy Juergens was pregnant before the show even started. A 15 year old girl got in trouble with the bad boy Ricky Underwood at band camp her first time out of the gate. It being television, abortion wasn’t an option. Week by week, character by character, sex was discussed making it prime for the best drinking game on television if you wanted to be drunk 15 minutes into the hour. If you were taking a drink every time the word sex was mention, you would be trashed. Colleges around the country had to be playing it. Somebody, please tell me I’m right!

Grace Bowman, daughter of the local doctor, dating the son of the local preacher and self proclaimed chastity queen (she wore a ring!) didn’t take long to fall asunder. Soon she was best friends with the town slut, Adrian, had sex with the preacher’s son Jack and thought her sinful act killed her father in a plane crash. All of this happened while saying “sex” at least three times a minute for 42 minutes out of an hour for about 120 episodes over five years.

Ben Boykovich never had a girlfriend, but like all boys his age, he fell in love with the pregnant Amy and wanted to marry her and raise her baby. As if that story wasn’t enough, after it had been played out, the exact same story was written into the show in the fourth season. A second boy fell in love with a random pregnant girl and wanted to be with her forever. These kids had sex indiscriminately and against advice of the worst parents on the planet (yes, that’s you former teen siren Molly Ringwald). There were marriages and divorces and more pregnancies and miscarriages and false alarms and stupid mistakes and a revolving door of relationships between a very close group of friends (teens and adults) that almost seemed incestuous.

The point of this rant is that it was one of the most unrealistic programs on television. The only thing fans waited for was the day that Amy and Ricky finally became a couple. Once they did, their marriage seemed inevitable and, despite the many times exes Ben and Adrian tried to break them up, they kept going for the sake of their son. Ricky wasn’t the bad boy after all. He was full of heart and responsibility and love. He was a perfect mate for Amy, even at that tender young age.

Season after season we watched as the two of them played the mating ritual and grew together and learned to communicate and became adults. Above all others on the show, they continued a steady path toward something. A future.

Tonight, in what could go down as the worst season finale ever written, that path was broken.  For reasons unknown the route to the end was riddled with flashbacks of how the characters got to the finale. Anyone who watched the show already knew that, thank you very much, and we could have used more attention paid to the main characters to close out their five year arcs. There was no closure to the adults and… Amy? She chose New York. She left Ricky and her son John behind to go to school. The irony here is that this is the first good decision she has made during the series.

But it’s too late for good decisions. After five years, viewers didn’t want what was best for Amy. We had been screaming at our screens for her to do the right thing for years. Now we wanted closure for us. Instead, the writers had a change of heart and ended the show on a level of reality heretofore unseen on the show.

Yes, this may make me a big baby. But I sat through years of some of the most horrid storytelling known to mankind. I deserved my happy ending. Amy had her chance and she lost it. That’s my two cents.