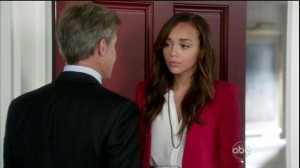 Ashley Davenport has climbed the final rung on the Hampton social ladder.

According to Deadline, Ashley Madekwe (Secret Diary of a Call Girl) will be departing Revenge after a two-season run as party-planner-turned-campaign-PR-rep Ashley Davenport. The actress had her option for next season declined by producers due to storyline reasons, as new showrunner Sunil Nayar tries to assess where the show will be going over its next 22 episodes, which are said to begin with a time jump.

Madekwe isn’t the only original cast member who won’t be seeing the third season, considering the death of Connor Paolo’s Declan in the season finale. Considering the falling ratings of the formerly buzzy soap, there might be more than just a story consideration in the dismissal of two players, since budget could have become more of a concern. This way, Revenge gets rid of two characters it never quite knew what to do with while keeping itself alive for another season and honing in more on Emily’s quest for vengeance against the Graysons. The latter got lost during the first half of season two in all the new characters and expanded stakes from the Initiative plot, but the show made a conscious effort to scale back during the second half of the season, something that’s apparently bleeding over into season three.

With no familial ties to keep him off to the sides, Jack is now forced into the Emily/Grayson fold 100%, while Ashley’s disappearance/absence could have impact for several characters, including former friend Emily and former boss/lover Conrad, who she turned against too late to keep out of public office. Ashley may have never had a steady storyline (dating a psychopath, being Victoria’s party-planner, bedding Conrad and Daniel, befriending Jack, working on Conrad’s campaign), but her absence will be felt on the Hampton social scene. Maybe now she’ll get the chance to go into the art world like she wanted.

In addition to her roles on Revenge and Secret Diary of a Call Girl, Madekwe has appeared on the likes of Bedlam, The Beautiful Life: TBL, and Wallander.

Revenge is set to air Sundays at 9:00 next season on ABC. You can check out the network’s 2013 fall schedule here.

Is getting rid of Ashley a good decision for Revenge? How do you think that the show will explain her absence? What do you expect from the next season of the show?