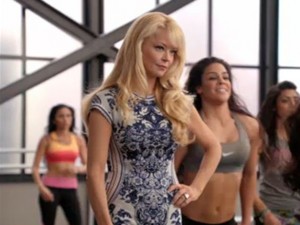 Ahsha may have been officially added to the Devil Girl roster on the series premiere of Hit the Floor, but that was the easy part. Now comes the difficulty of learning the routines, navigating the tension with Jelena, and staying true to German, all the while finding time to enjoy the fact that she’s following in her mother’s footsteps and the opportunity to be in front of a crowd 82 times per season. While she could have very easily taken the bank interview and led a nice, normal, safe life, Ahsha wants the challenge of being a Devil Girl and fulfilling her dream of being a dancer; her skills might have impressed Olivia and the suits upstairs, but is she ready for everything else that the position entails?

On the next episode of Hit the Floor, Olivia is putting the Devil Girls through a rigorous training process ahead of their first home girl. In addition to the physicality that the job requires, seeing as how they never stopped dancing while the squad leader speaks, the Devil Girls have to be prepared for any and everything (charity appearances, public events) and live lives free of scandal (that means no hooking up with fans, players, or front-office people), two things that certain members of the team will undoubtedly have problems adhering to. However, with their first performance is scheduled for the following day at a pre-season kick-off party, it looks like none of the Devils will have the time to repent for their sins and begin leading the pure lives they’re expected to by management. Is Ahsha going to continue being Olivia’s star pupil and avoid the trappings of a life in professional basketball? Or is it only a matter of time before her downfall?

Elsewhere on Hit the Floor, with the first home game of the season approaching, Jelena targets Ahsha and tries to seize control of the squad, while Raquel deals with issues from her child’s father and Ahsha rejects the advances of Derek at a team function.

What did you think about the first episode of Hit The Floor? Who will ultimately come out on top this season: Ahsha or Jelena? Does Ahsha have what it takes to be a Devil Girl?