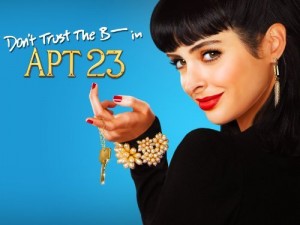 The eight unaired episodes of Don’t Trust the B—- in Apt. 23 will see the light of day after all, as they’ve been uploaded to Hulu, WATCH ABC on ABC.com, the WATCH ABC Player for iPad, iTunes, iPhone, iPod touch and Kindle Fire and will be live until June 2nd.

-“The Leak…” – It’s crunch time and James goes into serious training to be in top form for Dancing with the Stars. Luther is tasked with keeping James on a strict regimen, but leave it to a jealous Chloe to try and sabotage it. Still, that’s the least of their worries when embarrassing photos of James leak all over the internet.

-“Monday June…” – June has been so stressed and consumed with work that she has no time for anything else, including Chloe. Chloe’s remedy for this is to slip June an herbal relaxant, but the next thing June knows, it’s Tuesday, and Monday is a complete blackout. As she tries to piece together what happened, June discovers some surprising things about herself. Meanwhile, James grapples with the idea that he may have impregnated June’s friend, Crissy, on her wedding day.

-“Teddy Trouble…” – With the help of Teddy, her childhood friend from psychopath camp, Chloe prepares for the imminent battle-royale at an annual department store warehouse sale. However, she is uncharacteristically distracted by the return of Benjamin who, June insists, is Chloe’s true love. Meanwhile, James is disappointed to learn his Beek-brand jeans are not selling as well as expected.

-“The D…” – When Chloe gives June a ‘D’ on her yearly roommate evaluation, June correctly assumes the poor mark is due to her anemic social life. In order to up her grade, she agrees to go on a blind date with James’ agent’s assistant, Will. The pair hits it off, that is until June realizes they know a person in common. Meanwhile, Luther helps James prepare for an audition with Woody Allen.

-“The Seven Year Bitch…” – When Chloe uses her time-honored veto power to try to force James to break up with his new girlfriend, James decides to buck tradition and continue seeing the girl. Needless to say, Chloe doesn’t take the rebuff well, and so she and James decide to take some time off from their seven-year friendship. A devastated June does her best not to choose sides, but she and Luther soon discover how Chloe and James’ lives are drastically affected by their time apart.

-“Using People…” – June is shocked to discover that Chloe has been attending Alcoholics Anonymous meetings solely to have a captive audience for her stories… and to score free liquor. As June gives Chloe an earful for using people for her own ends, Chloe points out that hypocrite June has been taking advantage of Mark and his unrequited feelings for her, leading June to the realization that maybe she has stronger feelings for Mark than she’s been willing to admit. Meanwhile, worried he’s too “light weight” to be cast by Martin Scorsese, James tries to add some depth to his character by co-opting others’ tales of woe.

-“Ocupado…” – As Chloe and Benjamin’s sex-fueled relationship amps up, each admits to currently having additional sex partners in their “rotations.” While this revelation comes as no surprise – or deterrent — to either, Chloe is uncharacteristically jealous when she learns that she is number two on his roster, while Ben is her number one. Meanwhile, while working on a commercial, James competes with director Ben for the crew’s affections.

-“Original Bitch…” – Ten years before June moved to New York, Chloe moved into Apartment 23 and met her new roommate, Trish… the original “bitch.” After taking Chloe under her wing and teaching her everything she knew about bitch-itude, Trish betrayed Chloe and disappeared. Now, thanks to the services of a private investigator, Chloe’s got a lead on Trish and, with June in tow, sets off to exact her long-awaited revenge. Meanwhile, James learns his father isn’t his real father. Richard Dean Anderson (MacGyver) and famed Latin singer and actress Charo appear as themselves.

–The Voice will continue to alter its judging panel, as Christina Aguilera and CeeLo Green are set to return for the show’s fifth season in the fall. For the sixth season, to debut after the Winter Olympics, current judges Shakira and Usher will return. Blake Shelton and Adam Levine will be present through both cycles of the hit singing competition. The current cycle of The Voice is averaging a 5.2 rating, 14 share in adults 18-49 and 14.5 million viewers overall on Monday nights, making it the season’s #3 primetime series on ABC, CBS, NBC and Fox in adults 18-49, as well as the #2 entertainment series and the #1 reality series, according to “most current” results from Nielsen Media Research.

-SOAPnet has announced a One Tree Hill Father’s Day marathon for June 16th. Here are the episodes included:

10AM –  “To Wish Impossible Things” – Jake, Nathan and Lucas are sold to the highest bidder for charity in the annual Tree Hill “Boy Toy” Auction. Jake’s mysterious winning bid turns out to be Nicki, his former flame who abandoned both him and Jenny, their nine-month-old daughter. Nicki mistakenly thinks the two can reconnect, but Jake takes the opportunity to school her on the repercussions of her abandonment.

11AM –  “All of a Sudden I Miss Everyone” – Nathan and Haley leave their high school graduation ceremony when Haley goes into labor with their son Jamie. Karen’s delivery does not go well, and a momentary loss of life lets her, Keith and their daughter share a moment in heaven. Two weeks later, Haley and Nathan are nervous to attend a party and be away from the baby for the first time. Dan turns himself in to the police for Keith’s murder and is tormented by his sins in prison.

12PM –  “Things a Mama Don’t Know” – Peyton, spilling tears of joy, tells her fiancé Lucas that he’s going to be her “baby daddy”. Jamie is proud to hear that his father, Nathan, has been picked up as a point guard by the Charleston Chiefs basketball team. Lucas finds himself in the middle of a father-son feud in Hollywood, which gives him the opportunity to reflect on the type of father he wants to be. Brooke’s motherly instinct helps her track down her runaway foster daughter, and brings an end to two violent crimes that have haunted Tree Hill.

1PM – “A Hand To Take Hold of The Scene” – Lucas and Peyton have an exhausting trial run as parents when they babysit for the night.

-TNT has unveiled its scheduling for the 2013 NBA Eastern Conference Finals, which pits the Miami Heat against the Indiana Pacers.

-USA has greenlit two comedies, both of which will debut in the first quarter of 2014. Sirens, from Denis Leary and Bob Fisher, follows three of Chicago’s best EMTs whose sometimes silly, self-righteous and even self-destructive personalities make them unqualified for sustaining relationships, friendships and most occupations. Meanwhile, Playing House, which stars Jessica St. Clair and Lennon Parham, is a single-camera buddy comedy about what happens when two best friends come back together, just when they need each other most.

Under the Dome – Season 1