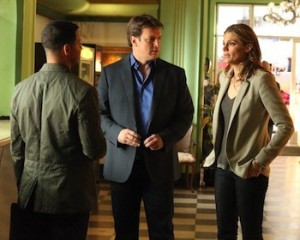 We were told “Watershed” was going to be an emotional roller coaster and we were not misled. Castle’s season finale made my heart skip many beats and shed many, many tears. I wouldn’t expect anything less from Andrew W. Marlowe.

Like many times this season, there were so many other things to deal with, that I really didn’t care about the case of the week. It’s not to say it wasn’t good, because it was. I was just so focused on Castle and Beckett, that I really didn’t care about anything else. The case did bring out guest star Mekenna Melvin, another Chuck alum. She had a small scene, but it was so great to see her on television.

The interactions between the characters tonight were just amazing. Castle and Alexis moments are always a personal favourite of mine and tonight they didn’t disappoint. Alexis wanted to go to Costa Rica for a school program and Castle didn’t want her to go because of Paris. Alexis, always so brilliant and strong, didn’t want to stop living her life because of her kidnapping. She didn’t want fear to win. It’s truly amazing how she’s grown over the years into this strong, intelligent woman. She’s right though. You can’t let fear dictate your life. Maybe there’s an underlying theme there. It seems like maybe Castle is letting his 2 failed marriages wreak havoc on his relationship with Beckett. Sometimes you just have to let go and not live with the fear of screwing things up, because that will in fact be it’s undoing.

I personally loved Gates confronting Beckett about her job interview in Washington. I never for one second thought Gates would be mad at Beckett. Gates in fact gave Beckett her highest recommendation. Gates believed this was an incredible opportunity for Beckett and wished she herself would have had an opportunity like that. Beckett is a smart, tenacious, and innovative thinker and is headed for bigger things and even Gates knows that. Things have never been perfect between these two, but I really like where their relationship is at now. Who knows what’s going to happen in the future, but I’m glad they shared this moment.

One of my favourite moments of the finale belonged to Kate and Lanie. I’ve always said we need more scenes like this with these two. I’m so happy we got this scene during the finale. I was just so happy Kate finally opened up about her interview with someone. I actually got a bit angry when Kate said to Lanie, “We never talk about where we’re going” in regards to Castle. Yes, Castle has never brought it up, but Kate hasn’t also. She’s in this relationship too, and if she wants to know where things stand, she should have brought it up to Castle. She really needed to just talk to Castle about the interview already. I really hated the fact that she was constantly lying to him. The guy stood around for hours while she was on a bomb. She owed him that much.

Another scene I totally loved was Esposito talking to Ryan about noticing something weird going on with Beckett. I laughed when Ryan immediately went to thinking Beckett was pregnant. I have to say though, it was the perfect transition to announcing to Javier that Jenny was pregnant. I sort of forgot Ryan hadn’t announced it to anyone yet. I love these kinds of moments between these two guys.

Now let’s talk about the scene that first broke my heart. First of all, how cute was Beckett making dinner with Castle? Well, the cuteness faded away real fast when Castle saw the boarding pass that fell out of Kate’s Jacket. Hallelujah! She finally told him about the interview. Although, it didn’t come out because she wanted to. It came out because she was caught. It seems like this is a pattern. Should I bring up the fact that Kate didn’t really come out and tell Castle Mr. Fantastic tried to kiss her. Castle kept on questioning things and then Kate came out with the truth. Castle was clearly upset with Kate because she lied and hid the job interview from him, and to tell you the truth, I didn’t blame him one bit. Yes Kate, it is about your life and I agree, you do have a chance to do more, but it would be without Castle. Castle was really hurt that Kate didn’t include him. I would feel the exact same way if my boyfriend went for a job interview in another city and didn’t even bother to let me know. Kate, you’re in a relationship with Castle now, you owed him the truth. By her keeping this from him, she made it a million times worse. Beckett had to have known deep down this would hurt Castle and yet she still hid it from him. This thought crossed my mind. If the boarding pass didn’t fall out of her jacket, when would have Beckett told Castle about the interview? I don’t hate that Beckett went for the interview. I just hate that she hid it from Castle. She has this amazing opportunity and she didn’t even tell the man she loves. I would say it says more about Beckett than her relationship with Castle.

One of the many things I love about this show is the relationships between parent and child. Whether it’s Castle and Alexis, Castle and Martha, or Kate and Jim, all of those scenes are always so amazing. Tonight was no different. I loved that Richard went to Martha for advice. Martha was right in telling Richard that Katherine deserved this opportunity. I think deep down, Castle knew that. He just needed to get past his anger first. Always the voice of reason, Martha told Richard he’s holding back with Beckett for some reason. Maybe deep down, he doesn’t believe his relationship with Beckett is going to really work?

“I know you, you don’t hold back, except this thing with Katherine. It took you what, 3 years to tell her how you felt about her, another year to act on it and now the first sign of trouble you run… why?” – Martha

Then the moment came when we found out Beckett got the job. I never doubted for a moment she wasn’t going to get it. Just like Castle, Beckett went to her father for advice. You could see how conflicted Beckett was. As much as I was annoyed with Beckett lying to Castle, I really felt horrible for her. Her and Castle have never discussed their relationship (which they are both to blame IMO) so she doesn’t know what her and Castle have. “We’ve been doing this dance for the past 5 years and what happens when the music stops? What if all we were in love with was the dance?” It just really saddened me that Beckett was afraid Castle was going to hate her. As much as Castle was angry that she lied to him, I would hate to think he would ever hate her.

When Beckett was looking around the interrogation room, I really got the sense she was feeling like it was her last time and she wanted to make it count. It was quite depressing seeing her walking down the hall and looking around at the desks. Did she make her decision already and chose the D.C. job? We all have to be realistic. With Beckett in D.C. would we really have a show? 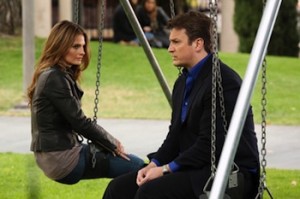 I literally jumped for joy when Beckett called Castle to talk. The moment I saw that swing set I burst into tears and my heart was racing so fast it could have competed in the Indy 500. I loved that Kate apologized. She was wrong, she knew it. Then came Castle’s turn. He wanted more, they both deserved more. The screams you heard next was from me, and I’m not apologizing. Castle proposed!!!!!! I honestly had no idea where that scene was headed. I truly thought Castle was going to tell Beckett to take the job in D.C. because he didn’t want to hold her back from this amazing opportunity that she clearly deserved. Now we must wait this long hiatus for Kate’s answer. Will Kate say yes? What was Kate going to tell Castle? How will this proposal affect her decision? How long has Castle had this ring? Did he buy it after his conversation with Martha? So many questions! This will seriously be the longest hiatus ever! Is it September yet?

This whole season has been incredible and I for one cannot wait to see what tricks Marlowe & Co. have up their sleeves for season 6.

So, I will leave you guys with these words from one of my favourite episodes and moments from the series.

“The last thing you want to do is look back on your life and wonder, if only.”