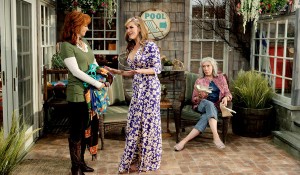 Yesterday, several networks made decisions on their slate for next season. While NBC and CBS finished off their renewals and cancellations while ordering more new series, ABC made every renewal decision and ordered seven dramas and five comedies. There are pilots for all three that remain in contention. Upfronts week kicks off on Sunday, with NBC revealing its schedule before its presentation on Monday. FOX takes over Monday afternoon, ABC follows on Tuesday, CBS continues on Wednesday, and The CW closes things up on Thursday.

You can check out every decision made during the first day here.

Which cancellation are you most bummed about? Which renewal do you think was the most surprising? Do you have any predictions for fall scheduling?

ABC
-The network renewed the following comedies for next season: Emmy favorite Modern Family; controversial Friday anchor Last Man Standing; quirky outsider tale Suburgatory; and blue-collar The Middle.
-The network canceled the following comedies for next season: late season premiere Family Tools; Sarah Chalke’s How to Live with Your Parents (for the Rest of Your Life); ensemble Happy Endings, which is reportedly being shopped to other networks; and Reba McEntire vehicle Malibu Country.
-Suburban alien comedy The Neighbors was originally given a renewal that was later retracted. At present time, no final decision has been made.
-The network picked up the following comedies for next season: Back in the Game, starring James Caan as an ex-athlete whose daughter moves back home; The Goldbergs, set in the 80s and about overprotective parents; Mixology, set in a Manhattan nightclub over one night; Super Fun Night, starring Rebel Wilson; and Trophy Wife, where a woman (Malin Akerman) becomes the third wife to a slightly older man (Bradley Whitford).

-The network renewed the following dramas for next season: pop cultural phenomenon Scandal, which just hit a series high; Thursday anchor Grey’s Anatomy; Castle, Monday’s top performer at 10:00; musical drama Nashville; and fairy tale fantasy Once Upon a Time.
-The network canceled the following dramas for next season: Dutch remake Red Widow and Dana Delaney’s Body of Proof.
-The network picked up the following dramas for next season: Betrayal, which follows an affair between a photographer and an attorney; Killer Women, following the first female Texas ranger; Lucky 7, about a group of gas station employees who win the lottery; Agents of SHIELD, from Joss Whedon; Mind Games, where two brothers use psychological manipulation to help their clients; Once Upon a Time spin-off Once Upon a Time in Wonderland; and Resurrection, based on the book “The Returned” by Jason Mott.

CBS
-The network canceled the following shows for next season: CSI spin-off CSI: NY; period drama Vegas; utility player Rules of Engagement; and Greg Berlanti’s Golden Boy, starring Theo James.
-The network picked up the following comedies for next season: single-camera The Crazy Ones, starring Robin Williams and Sarah Michelle Gellar; Greg Garcia’s The Millers, starring Will Arnett; Mom, starring Anna Faris as a recovering alcoholic working in Napa Valley; and We Are Men, following a newly single guy who is taken under the wing of a group of more experienced guys at his short-term rental complex.
-The network picked up the following dramas for next season: Jerry Bruckheimer’s Hostages, starring Toni Collette and Dylan McDermott and Intelligence, starring Josh Holloway as a key U.S. Cyber Command  agent with a microchip implanted in his brain that allows him to access the entire electromagnetic spectrum.