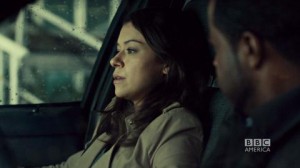 Just who is the major threat to the clones on Orphan Black? Much of this season has focused on Sarah, Alison, and Cosima trying to figure out what they need to be most fearful of and who they can trust in times of need. While they also have questions as to their identity, how many more of them are there, and how far the conspiracy into their creation runs, they’ve become much more aware of the threat facing them now that they know of one another’s existence. With Paul being taken out of the running due to the double-blind of the conspiracy, perpetuated by Olivier, there’s someone out there who means the clones harm and will stop at nothing to see that all of them meet the untimely ends of Katja and Beth.

On the next episode of Orphan Black, Cosima grows closer to Delphine and Dr. Leekie, though by doing so, she puts herself in danger. Leekie took too much of a liking to the grad student during their brief meeting for the chance meeting with Delphine to be purely coincidental. While Sarah and Alison are worried about other identicals and the identity of their monitors, the main threat to their safety might lie across the border in Minnesota, as Leekie’s unorthodox belief in voluntary human evolution. Is he using Delphine to get closer to Cosima so he can run experiments on her and learn more about the clones? Or could Leekie be the one behind the entire conspiracy?

Elsewhere on Orphan Black, Sarah confronts the conspiracy head-on and might receive help from one of the last places she expected: Helena, who might be the original.

What do you think the deal with Delphine and Dr. Leekie is? Just how much danger is Cosima in thanks to her connection to Delphine? Can Helena turn from a major threat to Sarah to one of her more valuable assets?