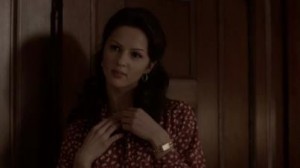 Less than a week after its critically lauded first season finale, FX’s The Americans has added two more series regulars for its second season. Annet Mahendru, who plays mysterious Russian spy Nina, and Alison Wright, portraying oblivious FBI secretary Martha, will join Susan Misner (Sandra Beeman) in enjoying full-time status on the espionage period drama. Each appeared in a majority of the episodes this season, Wright only missing two while Mahendru was present for all 12, but both were billed as guests. A bump to series regular means that, in addition to a boost in salary, they’re contracted to the show for a certain period of time and will continue to appear in most, if not all, episodes.

“Annet Mahendru has been a revelation as Nina, bringing the character to life with a rich and subtle depth that keeps you guessing as to what’s really percolating under the surface,” said Executive Producers Joe Weisberg and Joel Fields.  “And Alison Wright’s portrayal of Martha is heartbreakingly real at every turn.  We are thrilled to add them to our outstanding company of actors.”

Mahendru’s TV credits include guest stints on 2 Broke Girls, Entourage, and Big Time Rush, in addition to NBC pilot The Blacklist (in contention for the 2013-2014 season), while Wright has no other TV appearances on her resumee. Her biggest role came in the 2007 film The Nanny Diaries, where she played Bridget.

The second season of The Americans premieres in 2014 on FX. Production on the season is slated to begin sometime this fall.

What do you think next season has in store for Nina and Martha? How well do you think The Americans stuck the landing with its finale? Where should the show go in season two?