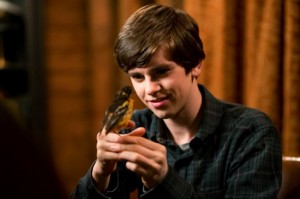 Norma gets a copy of the newspaper, whose headline tells of the bypass construction happening in July. She tries to call Romero and can’t catch him in his office, but before she can go down to see him in person, she has to clean Jake’s room. Once she’s inside, he mentions Zack Shelby and Keith Summers again, lamenting that you can never really know anyone anymore. He claims to be surprised at Keith’s involvement in the sex trade and asks Norma if she knew Shelby and how much she knew him. Already nervous enough to knock a lamb over a bust a bulb, she lies about the extent of their relationship and tries to go back to the office to get away from his line of questioning and creepy presence. He roughly grabs her cart when she starts moving, only to swipe a couple of towels, and then lets her get back to her business.

Norma gathers herself and makes her way down to the sheriff’s office where she brings the bypass to Romero’s attention and suggests that he recommend her for the city planning committee. If she gets on there, she might be able to fight the road construction from the inside and potentially save her motel. However, he’s having none of it and reminds Norma that they don’t owe each other anything, they don’t know each other, and threatening him with exposure is not her best move. He claims that he wouldn’t hesitate to burn her to the ground and once he tells her of their lack of connection, shows her out.

Norma then gets a call from Norman’s principal about his behavior at school and the fact that he’s been suspended. Along with a teacher, he points to her son’s emotional instability and they recommend that he see the school psychologist. Norma counters that she would rather be the one to choose the therapist and gets out of the room quickly,  but she does end up taking him to a therapist.

The night before the appointment, though, he gets her to take him to Emma’s where she talks to Emma’s father about what they’ve been doing lately and how she’s afraid that Norman will be (further) labeled as a freak if anyone found out. Mr. Decody assures her that the taxidermy lessons aren’t hurting anyone and that nothing can go wrong from a boy exploring his passions. Back at the motel, Norma  waits for Jake to leave and follows him to the marina, where he gets on Deputy Shelby’s boat, obviously looking for something. She tries her best to avoid being detected by him and nearly gets away before he almost backs into her with his car. He won’t say what he’s looking for, but he knows that Norma knows what he’s doing and that she came to the marina to spy on him.

Norma makes a break for her car and heads back to the motel on her own. The following day, she takes Norman to the therapist, where she ends up answering the therapist’s questions for her son and not allowing him to open up in any meaningful way. The therapist calls her on it, citing her need to control everything, which makes her storm out of the office and rush her son home. Once she gets back to the motel, she gives Jake his money back and tells him that she wants him gone within the next five minutes or she’s calling the cops. He seems mostly non-plussed about her threats, although he does leave and grant her wish. However, he leaves a little something behind – Deputy Shelby’s corpse in Norma’s bed.

Saving Juno
Norman has taken Juno’s body to Emma’s taxidermist father Will, who explains to him what will have to happen to preserve the dog and gives him a handful of books to look at photographic evidence. Mr. Decody apologizes to Norman for what happened to his little friend and offers to teach him how taxidermy works, should he be interested. The next day at school, Emma heads to the bathroom to take a hit from her inhaler and ends up overhearing three of Bradley’s friends talk about how pathetic Norman is for thinking he has a chance with her; instead of letting it go or waiting until they left, though, Emma stands up for her friend and tells the group that Norman did have sex with Bradley, contrary to what they believe.

Bradley hears about Norman telling Emma and confronts him in the hallway over it. Now that she has a boyfriend, she doesn’t want people to know about their encounter, a sentiment that leaves him quite upset. He ends up leaving in the middle of the school day, despite the protestations of Miss Watson, who he aggressively fends off in his attempt to flee school grounds.

That evening, Norman goes to Emma’s to check in on the progress Will is making on Juno and confronts her about telling Bradley’s friends. He questions her motives, informs her that Bradley was very upset about what happened, and warns her not to tell anyone anything he tells her in confidentiality again. After he comes over again following the therapy session, Norman helps Will with Juno’s stuffing, marveling at what the older man can do. He questions him as to how long he’s been doing taxidermy and the two bond in a way that Norman hasn’t with a father figure before.

Emma pulls Norman aside and apologizes for what she did, informing him of the talk she overheard and claiming that there were no ulterior motives in her decision to tell Bradley’s friends off. Although she’s used to things not going her way, including Norman not wanting to be her boyfriend, she thinks of him as being very special and doesn’t want to mess up a friendship with him. She feels safe with him. Thus, the two make up.

Fortuna Forever
Dylan and Remo are waiting in the tent for Ronny and Don to relieve them and take over the shift when Dylan gets a call from Gil. There’s to be an overnight trip to Fortuna where he and Remo should pick up trimmers – people who cut and process weed. The two end up at a bar along the way, where they get into a scuffle over Remo’s continued insecurity over being bossed around by someone with fewer years on this Earth than he has years working for Gil. Punches are thrown, tables are flipped over, and Dylan hits him over the head with a beer bottle before escorting him back to the hotel room. Once there, Remo warns Dylan to watch out for him and informs him of the big boss they’re working for, even ranked higher than Gil, and that there’s no quitting the job they’re in.

The following day, they pick up the load of eight trimmers and hit the road back to town. On the way, though, Remo gets annoyed by one of them playing guitar and singing, a man who complains about not getting lunch on time, as well. As Remo had bad history with him in previous years, he threatens him, but Dylan is the one who gets the van pulled over. He kicks the guitar player out and holds him at gunpoint until he complies, eventually leaving the man in the van’s dust. He and Remo arrive at the motel where the seven workers will be given rooms for the next two weeks. Elated, Norma invites him out to dinner, where it’ll be just the two of them.

Additional thoughts and observations:
-Being that my dad is a taxidermist, this episode was strange for me. And Bates Motel is already a strange enough show as it is.
-So is Jake the “big boss” that Remo mentioned? The entire episode danced around directly saying what/who he is, but it felt like that was what was being insinuated. That or he was the main guy in charge of the sex trade that Shelby and Summers were involved in, hence his desire to find (I’m assuming) the belt.
-I think this was the first time Miss Watson’s been involved in the show since Norman’s blackout, yes? (Also, for some reason, she reminds me so much of Sarah Paulson’s character in American Horror Story: Asylum.)
-For whatever issues one may have with the tone or plotting of the show, I think it’s one of the better directed shows out there right now. There were some individual shots, especially the sequence of Norma peering out the window at Jake in the parking lot, that are pretty breathtaking.
-Here’s your obligatory observation that Jere Burns is amazing and I’m excited/curious to see how deep his role this season will be. I look forward to more sparring matches between him and Vera Farmiga.
-As good as Farmiga can be (and she’s pretty darn great here), her character vacillates between psychologically fascinating and being a pain in the butt. We all knew how badly that therapy session was going to go and I was still inches from shaking my TV in frustration by the end. Get it together, Norma Bates. I know you don’t, but still. Get it together.
-Emma’s monologue to Norman was sweet, sad, and made me want to buy her a puppy. Intended goal? I don’t know.
-Next week on Bates Motel: Dylan and Bradley connect, while Emma goes on a trip.