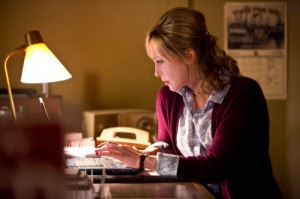 After its first guest check in last week, the Bates Motel has moved on from the insanity of recent times, its quarters already bearing witness to two murders, a sexual assault, and a whole lot of bloodshed in the time since Norma Bates purchased the property. This should be a time for the Bates family to put the entire Detective Shelby situation behind them, seeing as how Romero helped them concoct a story to cover everything up, and truly begin their new lives in White Pine Bay. However, the arrival of mysterious stranger Jake and his unusual arrangement with Keith Summers aren’t exactly omens of a brighter future for anyone, let alone Norma Bates.

On the next episode of Bates Motel, Norma finds out exactly who she’s dealing with in Jake Abernathy and it’s not what she expected at all. In agreeing to his strange terms, she thought she would be getting the motel much needed word of mouth and connections to businesses all over the area. That all may be true, but Jake is more than an aloof salesman who likes his privacy a little too much; he’s someone who could be a danger to Norma if she approaches him the wrong way or if he perceives that she’s crossed him, arguably more of a threat than anyone she’s faced yet. After getting through the incidents with Keith Summers and Deputy Shelby, Norma proved to herself that she can make it through tough situations. But is she prepared to deal with someone like Jake so soon after the recent tragic events?

Elsewhere on Bates Motel, Norman’s behavior at school, likely a result of what happened with Bradley and the dog, draws the attention of his teachers, while Dylan goes on a road trip.

Bates Motel airs Mondays at 10:00 on A&E. You can check out a recap of the most recent episode here.

Just what is Jake Abernathy hiding from Norma? How will Norman react to being around Bradley for the first time since he went to her home? Is Dylan’s road trip a way from him to get time away from Norma or does it have something to do with his new position?