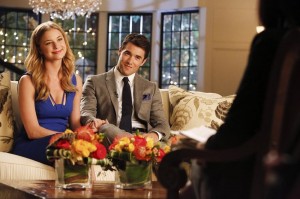 Last week on Revenge, Aiden said something rather poignant about the journey Emily was choosing to take. While talking to Takeda, he lamented that vengeance isn’t always worth it in the end and that Emily will one day look back on the lengths she went to to ruin the Graysons and see that. His own vengeance for the death of his sister didn’t bring him the peace that he thought it would and he feels as if Emily will undergo the same thing, that once she gets what she deems as fitting revenge against the Graysons, she won’t be satisfied or whole again. It was a rather dark thought to share, suggesting that the years Emily has put forth honoring her father will ultimately be for naught, and something that looks to have more validity the more collateral damage her path has wrought. This season on Revenge, Emily has started to doubt herself and the role that she’s had to play for so long, but will that extend to the journey itself? Is Emily Thorne going to reconsider destroying the Graysons?

Listed below is the date, title, and description of the two-part Revenge season finale.

Sunday, May 12th – “Truth, Parts 1 & 2”
In the first hour, entitled “Truth, Part One” (9:00-10:00 p.m.), a series of dangerous events has been set in motion and it all comes to a head in one catastrophic moment that will change everyone’s lives forever. In the emotional second hour, “Truth, Part Two” (10:00-11:00 p.m.), the devastation leads to a heartbreaking death that will send shockwaves down the shoreline and force Emily to take a hard look at the truth and the path of revenge she has embarked on.

Who do you think will be the one to die on Revenge? Will Emily find herself more determined than ever at the end of the season? How will the Hamptons be impacted by the events of the season finale?