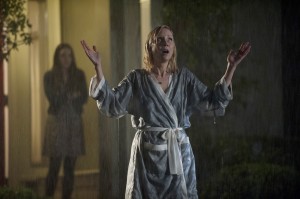 People have very different reactions to near-death experiences. Some cling to (or discover) faith that provides them with answers of where they go when they die, while others choose to live life to the fullest and thrust themselves into situations they wouldn’t have dreamed of before. Save Me‘s Beth is a different story, though, as the midwestern housewife nearly died choking on a sandwich she ate late one night. Instead of simply heading to church more often or taking more risks in her everyday life, she has a different reaction: she thinks she’s a prophet with a line to God.

While people in her life don’t believe her claims, they have to reevaluate their opinions when inexplicable things keep happening, which test their beliefs and everything they thought they knew about heaven, God, and spirituality. Meanwhile, emboldened by a new lease on life, Beth begins saying and doing things that she wouldn’t have before, things that shock her family and entrance her friends. Prior to her brush with death, Beth was listless and shallow, a woman without a purpose, but now, she’s become a better mother, wife, and friend, all the while clinging to her newfound “power”. Could it be possible that Beth actually does have a connection to God that wasn’t there before her incident? Or has everything that’s happened merely been a series of coincidences?

Save Me premieres Thursday, May 23rd at 8:00 and 8:30 on NBC. You can check out a list of fellow summer premiere dates here.

Will you be watching Save Me? Why do you think NBC pushed the show to summer? Do you think Beth really has a line to God after her brush with death?