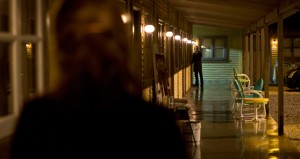 The police have responded to Norma’s 911 call and the leading officer on the scene? Sheriff Romero. However, rather than crack down on Norma now that she doesn’t have Zack to defend her, he comes up with a plan that lets her off the hook and heaps glory onto himself. He plans to say that he had been suspecting Shelby of corruption for quite some time, found out that his deputy was responsible for the death of Keith Summers, and caught him trying to move Jiao on the Bates property, which resulted in traded bullets and Shelby dying on the steps. Dylan’s shoulder injury would then be incidental contact, a means to catching a dirty cop.

While Dylan’s upset at not receiving proper credit from Norma for his heroic deed, she and Norman are preparing for the imminent opening of Bates Motel next week. Free of the Shelby-sized weight on her shoulders, she’s noticeably more upbeat and eager to turn the page, sending Norman out to fix the lattice before he goes to school; there he finds a dog that he feeds a bite and runs away. Inside, Norma finds out that Dylan is going to move out once his arm heals, seeing as how he doesn’t think he can be any help with Norman’s mental state. He takes the trash out in a huff and runs across a man in a black vehicle and sunglasses staring at the motel. The man asks him about the Seafairer and Keith Summers and when Dylan tells him about the new owners, he leaves without saying much else.

Norma decides to go out into town and network with various business owners, but her newfound motivation is cut short when the woman who runs a nearby restaurant informs Mrs. Bates of the motel’s reputation. It’s now tied to the Shelby/Summers situation and regardless of whether Norma was there or played a part, people have already been talking and they’re not saying good things. Deflated, she closes up her office that evening only to find someone trying to get into room number nine. It turns out that the man Dylan saw, named Jake Abernathy, had a standing agreement with Keith Summers where he would have room number nine for one week every two months. She gets him a new key without so much as getting a credit card or any form of identification, due to how excited she was to even have one guest.

Dylan volunteers to take down the mysterious man’s information and it proves to be harder than he expected, Jake barely willing to part with his license for even a second and tight-lipped about what kind of sales he’s actually in. He does have a huge wad of cash, though, suggesting that however he makes his money isn’t of legal means. Norma will take what she can get and uses the good energy from getting her very first guest to propel her to clean the bloody steps where Shelby died. She thinks that the opening weekend is going to make a big difference in how people perceive the Bates Motel and wants to do as good as she can to ward off the demons that have plagued her time in White Pine Bay. Although you can’t scrub blood out of stone due to it being porous, of course.

That night, Norma hears banging from a distance that wakes her up. She checks on Norman, who’s sound asleep and in no danger, before going downstairs to grab a knife and flashlight. The windy, rainy night makes it hard for her to see anything, but she notices that one of the doors has been opened, as if someone tried to come in on her before leaving. The following day, Emma stops by to see Norman, who doesn’t want to come down. Feeling bad for the girl, Norma offers to take her along to do errands and go to lunch; on the car ride there, Emma mentions Norman being distant and lets it slip that he’s seeing a girl from school – popular, pretty, and nice enough that you can’t hate her. Norma immediately begins questioning Emma about Norman’s female friend, leading the young girl to suggest spy on Bradley’s yoga class, which is right beside the place to buy window sheers. Norma sees her and her mind immediately goes to Norman being taken advantage of by what Emma calls a “locomotive of sexual energy.”

While Norma was gone, Norman hangs up signs around the motel and sees the dog again, which he feeds. She catches him and tells him that he doesn’t know where its been and to stay away. While he pleads to take care of it, seeing as how the animal is obviously lost, lonely, and homeless, Norma turns the conversation to sex and grills Norman about Bradley. She tells her son that any girl who would show up only one day after a boy moves in and sleep with someone she barely knows isn’t a nice girl, that having sex with a woman is a dangerous thing due to the chemicals that are released into her brain with each experience. She then informs him that she hired Emma to work at the motel for a few afternoons a week, which he thinks is her way of picking out his girlfriends.

Norman leaves when Norma questions whether or not she’s actually his girlfriend and goes to Bradley’s house, where she’s alone for the night. The two had run into each other a couple of times since their encounter and Bradley had been very distant with him, rejecting his offer at school to hang out later and acting very awkward when seeing him in town with Dylan. As she hadn’t been returning his texts, Norman thought that she was still grieving over her father, but it turns out that she doesn’t feel for Norman what he feels for her. After he spills his guts to her on her doorway about how their connection was real, she tells him that their encounter was only something that just happened and that she shouldn’t have done something like that with someone like him.

Hurt, he leaves down the road and she follows him, apologizing when she catches up with him. He starts to cry and then leaves again, this time for home. Once within distance of the motel, he sees the dog (that he calls Juno) and calls for her to come across the road to see him. However, he sees a car coming and tries to get the dog to stop, only its too late and she gets ran over. He picks up the dog with plans to take it to Emma’s dad, known for being able to help dead things, and tells Norma that she was right – about everything.

Additional thoughts and observations:
-Jake suggests he and Norma make the same business arrangement that he and Keith had, which was that he would rent out a block of rooms for one week every two months rather than just the one single. The people coming with him, deemed to be work associates, like their privacy and wouldn’t need anything from Norma, including room cleaning. She accepts, only for the promise of good word-of-mouth due to Jake’s business connections.
-I’m glad that they at least offered an explanation for where Jiao was (shot in the woods by Shelby), but I can help but get the feeling that she’ll pop up somewhere around the season finale.
-Dylan’s reaction to seeing Norma and Norman hug was interesting. At first, he was noticeably sad that they didn’t include him or that Norma didn’t seem to be grateful for what he did, but the longer it went on, the more creeped out he got.
-Visually, the show is one of my favorites on the air right now and tonight was very strong in that area. I love the way they do sex scenes (i.e. Norman’s dream about Bradley), plus Norma’s midnight scare and Jake’s meeting with Norma were shot like old school horror movies, in a good way. Bates is excellent at setting mood through its visuals.
-WYNN DUFFY. As a big Justified fan, the cockles of my heart were warmed to see Jere Burns pop up. And the preview for next week seems like he’ll get to go full crazy, which should be a treat.
-Freddie Highmore was amazing tonight, right? It was heartbreaking to see everything with Bradley and the dog and he played it beautifully, shifting into a more Norman Bates-y vibe pretty effortlessly. When Bradley caught up to him on the road, I half-expected him to kill her right there, especially once he began quoting Norma. The change on his face was subtle but very chilling.
-Next week on Bates Motel: Norma encounters a mysterious stranger, Bradley deals with rumors at school, and Dylan goes on a road trip.