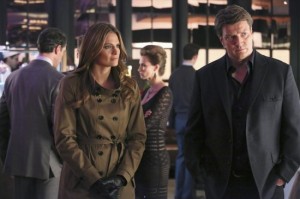 ABC has announced storylines that will be featured in each of its season finales this May. However, not every series has had a description of their finale released, falling into three categories as a result. There are shows like Scandal and Once Upon a Time that will be ending during sweeps but for some reason (production issues?) didn’t have finale spoilers released; there are also shows like Body of Proof, Bet on Your Baby, Family Tools, and How to Live with Your Parents that won’t be having a season finale within the confines of May sweeps, though they’ll be airing new episodes throughout; and there are shows like Dancing with the Stars and America’s Funniest Home Videos which aren’t the most conducive to season finale spoiling/teasing.

Which ABC finale are you most excited for? What do you think their schedule will look like next season? Should ABC have ended more of their shows during sweeps?

Friday, May 3rd
8:00 Happy Endings – “Deuce Babylove 2: Electric Babydeuce”
8:30 Happy Endings – “Brothas and Sisters”
The third Kerkovich sister, Brooke (guest star Stephanie March), is the alpha sister of the group, and Jane has the daunting task of planning a wedding for her more perfect and exquisite older sibling. Meanwhile, Brad is having a tough time himself dealing with Brooke’s equally more perfect African American fiancé, Elliot (guest star James Lesure), and Alex and Dave have a big secret they’re hiding.

Sunday, May 5th
10:00 Red Widow – “The Hit”
Since Marta now believes Schiller murdered her husband, she asks Andrei and Luther to help her come up with a revenge plan to kill him during the gun exchange. Also, an emboldened Marta approaches Alexandra to take over Schiller’s drug trade; and a remorseful Irwin tells Kat he wants to make up for the damage he’s done.

Tuesday, May 7th
8:00 Splash – “Episode 108”
The final three celebrity divers will take it to the top for the final time to perform a dive of their choice. The top two will be picked by the judges and will compete in a champion dive-off, but the first ever U.S. winner of the “Splash” trophy will be chosen by the live studio audience only! All of the previously eliminated celebrity divers will be back at the pool for a final dive.

Sunday, May 12th
8:00 Once Upon a Time – “And Straight on ‘Til Morning”
9:00 Revenge – “Truth, Part One”/”Truth, Part Two”
The second season of “Revenge” culminates in a special two-hour finale event with two back-to-back episodes filled with high octane and life changing moments, SUNDAY, MAY 12 (9:00-11:00 p.m., ET). In the first hour, entitled “Truth, Part One” (9:00-10:00 p.m.), a series of dangerous events has been set in motion and it all comes to a head in one catastrophic moment that will change everyone’s lives forever. In the emotional second hour, “Truth, Part Two” (10:00-11:00 p.m.), the devastation leads to a heartbreaking death that will send shockwaves down the shoreline and force Emily to take a hard look at the truth and the path of revenge she has embarked on.

Monday, May 13th
10:00 Castle – “Watershed”
In the season finale, an interview with a high-profile federal law enforcement agency forces Beckett to reconsider what she wants out of her job and out of her relationship with Castle. Meanwhile, the body of a young woman is found floating inside the water tank of a skid row flop house, but as the team investigate, they discover that her final resting place is just one of many strange things about her death.

Thursday, May 16th
9:00 Grey’s Anatomy – “Perfect Storm”
Grey Sloan Memorial Hospital enters crisis mode as the storm rages, resources become scarce and patients flood in by the busload. Meanwhile, one of the doctors fights for their life.
10:00 Scandal – “White Hat’s Back On”

Friday, May 17th
8:00 Shark Tank – “Episode 423”
9:00 Shark Tank – “Episode 424”
The Sharks circle around two Wharton School business graduates to get a piece of their app which provides international travelers access to live translators. An 11-year-old “kidpreneur” from Stamford, CT asks the Sharks to invest in his after school business — all-natural dog treats inspired by his pet dog. A busy, single lady from Los Angeles has a way to help find love through her dating website designed to attract quality singles. And two buddies from Cincinnati, OH hope the Sharks will bite into their franchise business specializing in gourmet grilled cheese and tomato sandwiches. In a follow up segment, Beverly Vines-Haines & Charlotte Clary from Yelm, WA give an update on their sugar free candy company, Ice Chips, which Barbara Corcoran and Mark Cuban invested in during Season 4.

Wednesday, May 22nd
8:00 The Middle – “The Graduation”
As graduation day approaches, tension begins to build between Frankie and Axl when he ignores her requests for answers about the graduation party she’s planning for his special day. Meanwhile, Sue hopes that the sixth time’s the charm as she once again attempts to pass her driver’s test; and during his final days of elementary school, a forgetful Brick is reminded by Vice Principal Dunlap (Marion Ross) that he’s the class historian and is responsible for putting together a slideshow highlighting the last four years of school for the school assembly.

9:00 Modern Family – “Goodnight Gracie”
Everyone flies down to Florida to be with Phil after his mom’s passing. Claire helps Phil with Gracie’s last wish for Frank, and the kids reflect on the gifts grandma left for them. Gloria has to contend with an outstanding arrest warrant in Florida, Cam finds himself fitting right into an elderly women’s group at Frank’s retirement community, and Jay runs into a pivotal person from his past.

10:00 Nashville – “I’ll Never Get Out of This World Alive”
Brad Paisley guest stars as himself and performs with Rayna and Deacon. Guest starring Brad Paisley, Chris Carmack and Kimberly Williams-Paisley.