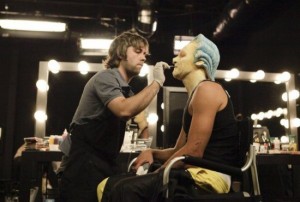 Syfy has announced the premiere dates for the shows on its summer schedule, beginning with all new episodes of Total Blackout on Tuesday, June 4th at 9:00. The summer premiere of the Jaleel White game show is set to feature three mother-daughter teams fighting for the grand prize. Following Total Blackout will be the series premiere of Exit, an adaptation of hit Japanese series Dero! that finds four teams of two contestants battling to escape a series of puzzling rooms. The last team remaining each episode wins $10,000.

The United States premiere of Continuum‘s second season airs Friday, June 7th at 10:00 following WWE Smackdown, a shift from the show’s Monday time slot that season one aired in this winter. The following day finds two international imports joining the likes of Lost Girl on the network, as Sky’s Sinbad debuts Saturday, June 8th at 9:00 with Canadian drama Primeval: New World following at 10:00. While the former follows the epic sea journey of cursed hero Sinbad, the latter tells the story of a team of animal experts and scientists investigating paranormal events.

After being delayed from its original premiere date, Ghost Hunters makes it summer premiere on Wednesday, June 12th at 9:00, featuring the return of Amy from maternity leaves and an investigation of Louisiana’s Shreveport Auditorium, the place Elvis Presley was said to play his first gig. On July 16th, two new series will join the Syfy lineup, as Joe Rogan Questions Everything leads off at 9:00 and Notorious Hauntings concludes the night at 10:00. Joe Rogan Questions Everything features the actor, a life-long unexplained paranormal mystery-addict, traveling the country to find the truth about startling theories, while Notorious Hauntings finds a team of paranormal experts looking into reports of extreme and dangerous supernatural activity around the world. Among the subjects that will be investigated are the case of Jack the Ripper in London, Dracula-inspiration Vlad the Impaler in Romania, and the bloodthirsty Borgias in Italy.

Meanwhile, Haunted Highway returns for a second season on Wednesday, July 24th at 10:00. This season will feature investigations into Fort Jefferson in the Dry Tortugas.

The fifth season of Face Off is set to premiere Tuesday, August 27th at 9:00, bringing back all three judges, host McKenzie Westmore, and contestant Michael Westmore in the process. The hit reality-competition series, which signed off from its fourth season in March, will lead into the series premiere of Cosworld, a docuseries that follows a group of cosplayers as they head to conventions around the country.

The only TV movie announced by the network is Independence Day-saster, which will premiere Thursday, July 4th at 9:00. Starring Ryan Merriman and Tom Everett Scott, it finds an alien invasion crippling conventional defense forces, prompting the President’s brother and a renegade scientist to defeat the enemy invaders.

You can check out Syfy’s current development slate here.

What will you be watching on Syfy this summer? Did they make the right decision in expanding their scripted programming into Saturday nights? Which of the new shows do you think will work the best?

I would love to see the end of behemoth but I didn't have enough air Tim and cut off before the end.

Sinbad and Primeval New World are both "Sky" programs that can be found online (full seasons), and have already been cancelled. There is NO season 2 for either of them ... so, don't get too excited, just incase SyFy doesn't pick them up for second seasons either ... after this summer, they will probably be gone for good.