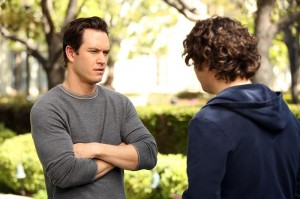 The hunt for one of the men responsible for the bombings in Boston may have bumped regular programming from the big four networks, but the episodes will all air at some point. ABC has scheduled the two episodes of Happy Endings that were displaced, one where Penny moves on from Pete with another guy and another where Max tries to get his life together with Jane’s help, for this coming Friday, April 26th. As a result of the bump, the Happy Endings third season finale is now set for Friday, May 3rd at 8:00 and 8:30.

-Mario Lopez will be returning for the third season of The X Factor, slated to premiere this fall. His season two co-host Khloe Kardashian-Odom, meanwhile, has gone the way of Steve Jones and won’t be returning.

-History’s Bonnie & Clyde miniseries has started production in Baton Rouge. Starring Emile Hirsch (Into the Wild) and Holliday Grainger (The Borgias), the event tells the story of intuitive criminal Clyde Barrow, fame hungry Bonnie Parker and the rest of the notorious Barrow Gang as they swept through the Central United States committing small-time robberies and daring bank heists and will be simulcast on History and Lifetime later this year.

-Comedy Central has officially canceled Futurama ahead of its June 19th summer premiere date. The series finale is set for September 4th and will cap off a summer season with guest stars ranging from Larry Bird and Burt Ward to Sarah Silverman and George Takei. Producers are reportedly exploring other options to keep the series alive.

-Ahead of Lost Girl‘s third season finale tonight, Syfy has launched Lost Girl: The Game, a free mobile gaming app available for download on iOS and Android devices. The game, written by the show’s writers, allows players to create a customized Fae character that they can use to venture through the world of Lost Girl, including creating their own avatars, embarking on missions and uncovering hidden objects, in order to score points and unlock levels.

-USA has ordered five additional Psych scripts, which would bring the eighth season total to 13. However, script orders don’t always translate to episode orders, though the sleuth dramedy has been performing very well since its winter premiere.

-At their upfront presentation today, E! unveiled an extensive programming slate of both scripted and unscripted content. Set to premiere this year are The Wanted Life, a docuseries about British boy band The Wanted (June 2nd); Total Divas, following a group of WWE divas outside the ring (July 28th); Pop Innovators, an interview show that celebrates the most influential names in pop culture – in their own words; The Soup Investigates, a spinoff of The Soup that finds Joel McHale and a series of reporters delving into various pop culture mysteries; Hello Ross, an interactive talk show led by Ross Mathews; and The Trend, featuring a team of experts talking all things design, fashion, and beauty.

Among the subjects for unscripted programming are wine families of Sonoma; female poker players; real estate agents; and paparazzi. Scripted development includes Laurel Canyon, a drama from Josh Schwartz and Stephanie Savage that centers on a young woman returning to her dysfunctional family in Laurel Canyon with her son after hearing her rock-star legend father has passed away; Songbyrd, about a young songwriter with an unsatisfactory love life and featuring the songs and experience of prolific songwriter Diane Warren; Expectations, a soap about a morally corrupt family in the diamond business; Dirty/Pretty, a dark comedy about a blue collar guy from south Boston who gets scouted to be a model in Miami; and Fortunate Son, following a society golden boy turned criminal informant.