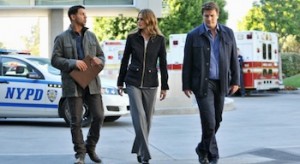 Bigfoot, a Gorilla named Moonshine, B-Team, and an adorable Caskett bedroom scene provided much needed laughs on a such a tragic day. My thoughts and prayers go out to all those affected by the tragedy in Boston.

Laughs is definitely what we got. Martha started us off with her comment to Castle about pigging out on leftovers and sleep eating and Beckett added to it with her “Mystical ape man.” Christine Roum (the writer of the episode) and Jonathan Frakes (who directed) totally nailed it.

The case of the week was quite intriguing and kept me guessing right until the very end. Our victim Anne Cardinal was quite gruesomely murdered and of course Castle believed she was killed by Bigfoot. Beckett, the skeptic didn’t believe Bigfoot was the culprit. I love that it’s Beckett and Esposito vs Ryan and Castle when it comes to crazy theories against the more logical explanation. The show has amazing consistency. Speaking of consistency, I loved when Castle said “that is not good for my knee” when him and Beckett fell into that trap. It was only last episode that he was down for the count from his skiing accident. 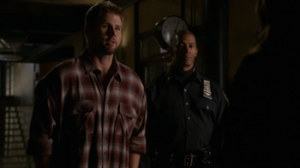 I love Lanie and I really think she should be featured more, but we got some great zingers by Perlmutter this episode. His B-Team reference to Ryan and Espo was gold. He’s one of those characters that sorta gets under your skin, but you love him anyways. I also loved that we got a little Martha this episode. She was so smooth with her little zingers at Castle. “Pigging out on leftovers” and “Sleep eating.” Was I the only one who took that as a little crack at Nathan? It’s no secret I thought Nathan was looking a bit unhealthy last season and a little bit this season. To be honest, he’s looking a lot better these days. I was in L.A. a couple weeks ago and got a quick look at Nathan while I was on a Castle location shoot. Nathan was looking quite good. We also met the awesome NYPD Officer L.T., who took the time to chat with me and my friends. I love that we got to see him at the end of “The Fast and the Furriest” when they were releasing Kurt Wilson.

Now for that bedroom scene. You can’t see the facial expression I’m making, but I’m pretty sure you can guess it. I really think Marlowe and Co. have installed listening devices in all our homes. They are seriously giving us fans exactly what we want. I just love that they were asking what each other believed in. It’s truly amazing that after all these years there’s still so much these two don’t know about each other. That’s what makes them being together so great. They’re still learning so much about each other and totally crushing that stupid “Moonlighting curse.” Some shows get boring after the leads get together, not this one. We even got another well lit kiss!

Moments from the episode I loved:

Castle: “I know who the killer is. Did you see how that gorilla looked at me?”

Beckett: “Yeah I think it was lust actually, Castle. You are ruggedly handsome.”

Alexis turning into a smurf after she was caught stealing Castle’s food from the refrigerator.

Beckett: “Come on, Castle. Why don’t you pop a squat, we’ll do a cheerleader move.”

Castle: “Shouldn’t you be wearing a short skirt for this?”

Beckett: “No, I’m scared I might murder you and then I’d have two crime scenes.”

Beckett: “You know, there is one inexplicable mysterious phenomenon that I do believe in still… us.”

Castle: “I can appreciate the everyday but why not live in the possible? There world just doesn’t have as many mysteries anymore. There’s no new continents to explore, there’s no more deepest, darkest Africa. Everything is mapped out by satellites and sonars and yet, still, people reach for the unknown. That’s what makes us grow. Coltrane wouldn’t have had that saxophone if Antoine Sax hadn’t imagined it. Isn’t that what separates us from, say, moonshine?”

“The Fast and the Furriest” didn’t knock off “The Lives of Others” as my favourite episode this season, but it was still great. I’m still giggling just thinking about Dr. Darrell Meeks dressed up as Bigfoot. I’m happy this past episode was a funny one, because the promo for “Still” definitely got my heart pumping and by the looks of it many tears will be shed. Can I just say, bravo CTV! The people that do the Castle promos are amazing. I definitely need to find out who they are and send them an Edible Arrangements or something. They definitely bring it against ABC when it comes to the promos.