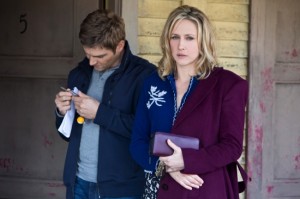 A&E has announced that acclaimed drama Bates Motel has been given a second season renewal. The show will return for another 10 episodes sometime in 2014 after beginning pre-production later this year.

The premiere of Bates Motel garnered 4.5 million total viewers and 2.5 million adults 25-54 and 18-49, based on Live+7 viewership, making it the most-watched original drama debut in the key demos in the network’s history.

“Bates Motel has garnered critical acclaim and a loyal audience in its first few weeks,” said Bob DeBitetto, President and General Manager of A&E Network and BIO Channel. “With superb writing and exceptional acting, led by the critically acclaimed performances of Vera Farmiga and Freddie Highmore, we’re incredibly excited to see where Carlton and Kerry take Norma and Norman Bates next.”

Bates Motel follows Norma Bates (Farmiga) and her son Norman (Highmore) as they move to a new town to start anew following the death of Norma’s husband. Once there, though, they discover that the idyllic small town they thought they were going to be living in isn’t quite the picture perfect utopia. The show features Max Theriot as Dylan, Norma’s son from a previous relationship; Olivia Cooke as Emma, Norman’s friend with cystic fibrosis who’s helped investigate the contents of the notebook; Nicola Peltz as Bradley, a popular girl in school who Norman is friendly with; Nestor Carbonell as Sheriff Ramos, suspicious of the Bates family from day one; and Mike Vogel as Deputy Shelby, a man with more secrets that he lets on.

Bates Motel airs Mondays at 10:00 on A&E. You can check out a preview of tonight’s episode, where Norman can’t find anyone to believe him about what he found at Shelby’s house and Norma begins to wonder about the other town residents, here.