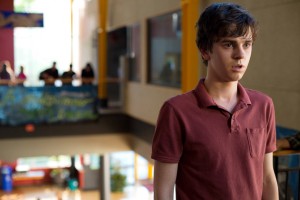 The only person who Norman Bates will let in on Bates Motel is his mother, Norma. Interactions with Bradley and Emma may make him feel good and gradually coax him out of his shell, but before he can fully embrace the idea of having unconditional friends, he self-sabotages. As much as part of him may want to have a “normal” life, Norman only knows how to be close to his mother and doesn’t want to open up to anyone else for fear of being rejected. It’s a sad existence, but it’s an existence that Norman seems perfectly comfortable in, the sense of protection he feels from his mother the main benefit of clinging to her so tightly. But what happens when that one source of support, that one shoulder that he has to lean on turns against him following the incident at Detective Shelby’s house?

On tonight’s episode of Bates Motel, Norma doesn’t believe that Norman saw what he did in Shelby’s basement, turning his world upside down. The reason he went over there in the first place was to find Keith’s belt and help his mother out from under Shelby’s thumb, so for her to be unappreciative doesn’t compute. Of course, Norman didn’t do himself any favors by taking too long and getting caught in the act, but still, he’s already so frazzled by the notebook (and finding the girl in the basement) that not having Norma to support him will be hard to take. However, lest young Mr. Bates be adrift in the sea of his own madness, Dylan steps up to his defense and confronts Norma about the possibility of getting Norman taken away. Will that threat get her to listen to what her son saw in the basement? Or is she going to continue to hold on to the idea that Detective Shelby is their way out of this mess?

Are you surprised that Dylan is the one who seems to be taking up Norman’s cause? Will Norma be arrested by Detective Shelby now that Norman’s been caught breaking and entering? Was the girl Norman found in Shelby’s basement one of the girls mentioned in the notebook?