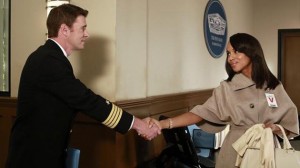 For someone who has dedicated her life to helping people in need, Olivia Pope is one closed-off individual. The Washington fixer spends much of her time tending to the needs of her clients and has built a reputation of being a tough, thorough, and fair-minded advocate for those with no one else to turn to. But she doesn’t let anyone into her personal life – not her clients, not her co-workers at Pope & Associates, and not those with whom she tries to date. Aside from Fitz, everyone who has tried to get close to Olivia has been rebuffed and caused her to run back into the shadows, but recently on Scandal, she’s seemed to warm up (ever so slightly) to Captain Jake Ballard. Is he the one who will break down her walls and make her reconsider how she’s approached her dating life?

On the next episode of Scandal, Jake has come to Olivia’s place to continue his attempt at charming her. He tells her that she deserves to have a do-over, to shrug off what happened in her past and forge a new connection with someone that could ultimately be beneficial to her. Granted, this would all be much more romantic if he didn’t have her apartment bugged, but the sentiment is something that Olivia needed to hear. Her heart may ultimately belong to Fitz right now, but  she can’t spend her life waiting for him; she has to live for herself and find some way to change her view that love has to hurt, has to cause anguish to be considered “real”. Jake ultimately won’t be the man to allow her to let go and let herself be happy, but he’s not wrong in trying to get her to love herself enough to let someone else love her, too.

Elsewhere on Scandal, Hollis goes to Pope & Associates for help when his daughter is kidnapped and held for ransom, while Cyrus and Mellie continue battling to get into Fitz’s good graces.

Will Olivia let herself trust Jake? Who would have the motive to kidnap Hollis’s daughter? Will Cyrus be able to outsmart Mellie and become Fitz’s right hand man again?

There are no words for the awesomeness of this sneak peek. I love Jake and Olivia together!! "close your eyes"