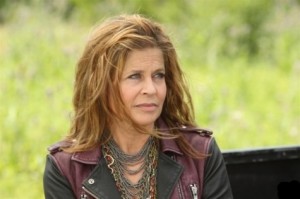 Bo is feeling quite well after emerging from the Dawning (mostly) unscathed. Her mood lifted and a new desire to cook bubbling to the surface, it’s a rebirth that was long in the making for the succubus; she’s still the same Bo that her loved ones have grown attached to, but now, she’s better, faster, stronger, and most importantly, happier. However, she still has to protect those in danger and this week’s case finds two dead bodies popping up at a camp for underage fae delinquents. Dyson has been charged with leading the investigation into the deaths and calls up Bo and Kenzi to help him infiltrate the camp and gather information, the former getting to relive her time as Camp Chippewa counselor and the latter leaning in to her troubled past to pose as a delinquent.

The camp is decidedly less green and nature-y than they realized it would be, as it was less summer camp and more detention center with its sea of concrete, barred windows, and sparse bunking. Among the attendees are Della, the girlfriend of a boy found dead at camp, and Nelson, who makes the mistake of challenging Kenzi on her badass-ness. Kenz takes the act of sticking it to the man in order to gain acceptance a bit too far later when Bo tries to play counselor and ends up falling on her butt, though for her money, all of the attendees are just various remixes of angry.

After getting in from scouring the grounds with Jolene, the head of the camp, Dyson comes into the living quarters and locks the delinquents in their community residence for their own protection. Already annoyed at having to be at the camp, the kids pick the lock and flee their domain, scattering across the camp in the process. Meanwhile, Bo is talking to Lauren on the computer and finds out that the body of Della’s boyfriend Matt was found stuffed with leaves and twigs, something that would have taken hours and indicates that he was tortured before succumbing to his wounds. As they’re talking, Lauren sees the monster that perpetrated the crimes, a forest creature known as a tickbalang, behind Bo, eventually attacking her. The doctor calls Dyson and gets him to come help, but the fae escapes and the others are left to formulate a plan.

The tickbalang, which originated in the Philippines, disorients travelers, and is strong as a horse, can only be defeated by being smoked out of its hideout and having its mane cut. They come up with a plan to use the skills of the campers to make a pipe bomb that would explode inside and help draw the tickbalang out before Bo and Dyson would subdue it. Once it goes off, Bo finds the fae quickly, who turns out to be Jolene, who growls that they all deserved to die. She then gets her hair cut off and thus, loses all of her power.

But that’s not it.

Nelson, the confrontational camper with a Klingon-ish tattoo dedicated to his girlfriend on his forearm, comes after Lauren for comments she made about Jolene. He was in on everything with Jolene (his girlfriend), as they were in the midst of an old fae hunting game that used caltrops as a way to mark prey. As he’s choking Lauren out, Bo bursts through the door and subdues him long enough for Dyson to come in, slap the cuffs on him, and haul him off. He’ll be going away for a long time.

A Hairy Situation
While walking down the street, Tamsin gets jumped by Acacia, an acquaintance for many years and an assassin/bounty hunter who has been tasked with bringing Bo to their boss. He knows that Tamsin has found Bo and Acacia volunteered to come work this case because she knows how good the Valkyrie is at sealing the deal and getting her target. However, when they go out to a field and reminisce about the good ol’ days, Tamsin doesn’t seem into the idea of collecting Bo and delivering her to the boss. In fact, she offers to get someone else that he wants and bring them in Bo’s place, but Acacia reiterates that her job was to nab Bo – nobody else.

To counteract the impact that the Dawning had on Bo’s physical and mental health, Acacia brings out a jar meant to hold six hairs – one from someone Bo loves, two from someone she trusts, and three from her. If Tamsin can collect those six hairs and return the jar to her, the druid will be able to do the rest, but again, the Valkyrie is hesitant about going through with the task. She goes to Dyson’s apartment and finds his shaving kit, which including a comb, and places the hairs inside. However, she also finds a picture of Bo in his nightstand which makes her throw the jar away in his garbage can and walk away defiantly.

This, of course, pisses Acacia off because it’s not just Tamsin’s neck on the line; it’s hers and if she doesn’t bring Bo back, none of her past successes will save her from having to face the consequences. She guaranteed that Tamsin would be able to do her job and she’s going to make sure that it gets done, come hell or high water.

Tamsin receives a package at the police station – Acacia’s severed hand and the jar that she threw away at Dyson’s place. More motivated than ever to do her job, she goes to Lauren’s and collects the hair she needed (while stirring up trouble by bringing up the kiss she and Bo shared before Bo was able to); finally, she heads to Bo’s place and collects the three hairs in a botched apology hug. But what exactly will the druid do when he receives what Acacia asked for?

Additional thoughts and observations:
-“That reminds me – take your top off.”
-“The Discovery Channel led me to believe there’d be more green.”
-“Bitch, do I look like a wizard?”
-“Wolves wish I loved them.”
-“I’d slow clap if that wasn’t so lame.”
–Lost Girl is, of course, a very clever show, but the biggest laugh it’s given me in a while was Kenzi mishearing “tickbalang” as “ticklebang”. Mainly because that’s what I heard the first time they mentioned it and I was tickled (ha!) that they acknowledged it on the show.
-So, Lauren was shell-shocked enough about the Bo/Tamsin kiss that she put her relationship with the succubus on hold, at least for the time being. The “break” that was instituted over tears and talk of traveling abroad sure felt like a breakup, though.
-I’m glad that this episode came right after the Dawning; it was goofy and silly, but it brought the levity needed after such an emotional stretch of the show.
-Linda Hamilton was good as Acacia, right? I hope we get to see her again someday – I’m curious as to what she’d replace her hand with a’la Merle on The Walking Dead.
-Kenzi exposing Nelson for being a poser was a delight and encapsulated why I love her so much.
-Maple syrup whiskey is actually a thing, you guys, and not a Canadian stereotype.
-I have no idea why Acacia and Tamsin drove out to the field to talk – it looked like they were either on a date or in a commercial for tampons.
-Dyson and Bo are in a good place after what happened at the Dawning. Even though she reminds him that she loves Lauren, he says that people who underestimate her tend to lose and that he wasn’t afraid upon entering the temple. He wasn’t risking his life; he trusted her enough to save it.
-Interestingly enough, Lauren and Dyson are drinking buddies now, following the dissolution of Doccubus. I always like when a show subverts the love triangle trope, especially when it involves the two “enemies” making nice and bonding.
-Next week on Lost Girl: Bo and Kenzi investigate a gated community after a babysitter asks them to investigate the suspicious death of her employer, while Lauren makes a difficult decision.