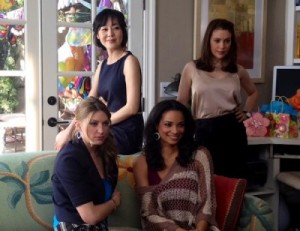 Summer on ABC is set to begin earlier than on the other networks, as the next season of Wipeout kicks off on May 9th. The network has also decided to launch the next season of The Bachelorette and latest Canadian import Motive in-season, both set to follow the final performance and results show of Dancing with the Stars, respectively. The latter is a crime procedural that reveals the victim and killer at the beginning of each episode and uses flashbacks to establish a relationship between them and motive for the crime.

Motive moves to its regular home of Thursdays at 9:00 on May 23rd where it leads into the season premiere of fellow Canadian cop drama Rookie Blue, while The Bachelorette slides from 10:00 to 8:00 come Monday, May 27th for its first two-hour episode of the season. It will be followed by scripted soap Mistresses, which stars Alyssa Milano and Yunjin Kim, come June 3rd.

Another two-hour reality show on ABC this summer is Extreme Makeover: Weight Loss Edition, moving from Sundays to Tuesdays for the summer. Meanwhile, What Would You Do? settles into the Wednesdays at 10:00 timeslot as of May 29th and Celebrity Wife Swap premieres its slate of summer episodes starting on Sunday, June 23rd at 8:00. 9:00 sees the debut of Whodunnit?, a nine-episode alternative series that puts 13 contestants’ investigative skills to the test in a mystery reality competition. Each week players will use a variety of crime scene investigation techniques to meticulously uncover evidence that will ultimately reveal who among them is the killer.

The network has yet to unveil the scripted repeats it will be airing this summer.

What will you be watching on ABC this summer? Do you think that Mistresses can draw an audience hungry for original scripted content on broadcast networks during the summer? Was Desiree a good choice for The Bachelorette?

Monday, May 20th
9:00 The Bachelorette (special day and time)

Tuesday, May 21st
10:00 Motive (new series premiere on a special day and time)