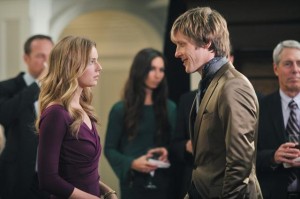 Following the CW, FOX, CBS, and NBC, ABC has officially announced the season finale dates for its current slate of shows. Beginning on March 27th with the finale of The Neighbors and extending through a post-sweeps wrap-up for Body of Proof, the network will be bringing its schedule to a close; slated to have extended finales are Suburgatory and Revenge, the former move to the 8:00 time slot for the final night of its second season. Unlike most of their competition, ABC is airing many of their finales on the same night, as a majority of their Sunday (Once Upon a Time, Revenge), Wednesday (The Middle, Modern Family, Nashville), and Thursday (Grey’s Anatomy, Scandal) lineups will finish together.

Family Tools and How to Live with Your Parents (for the Rest of Your Life) did not receive confirmed season finale dates, though both late-season entries will likely air into summer.

Which ABC season finale are you most looking forward to? Is Suburgatory getting a one-hour finale a good sign for its renewal chances and potential scheduling for next season? Do you like ABC airing more of their finales together?

Monday, May 20th
8:00 Dancing with the Stars (One-Hour Performance Show)

Tuesday, May 21st
8:00 Dancing with the Stars (Two-Hour Results Show)