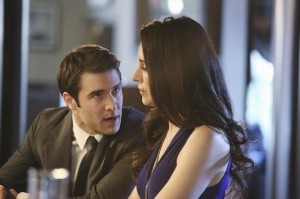 Emily Thorne has been preparing for revenge on the Grayson family for quite a while. Many hours, many days were spent covering her bases and making sure that her life as Amanda Clarke was as fleshed out and believable as it could be. Even when snags have been hit, she’s improvised well enough to keep the Graysons off her trail, but her time in the Hamptons hasn’t been perfect. She’s developed an unexpected fondness for Charlotte and still harbors feelings for Daniel, while her sisterhood with the real Amanda Clarke resulted in death that was arguably Emily’s fault. For much of the second season, Emily’s vulnerability has been outweighing her hunger for revenge, but with Amanda gone, she’s refocused, reenegized, and ready to take down the Graysons.

Listed below are the date, title, and description of the next three episodes of Revenge.

Sunday, March 17th – “Illumination”
The queen and king of smoke and mirrors, Victoria and Conrad, make a calculated move, starting a charitable foundation in the late Amanda Clarke’s name. But little do they know that Jack is not buying it and has a plan of his own. Meanwhile, Emily’s past catches up to her again.

Sunday, March 24th – “Victory”
With Victoria enlisting the help of Amanda’s foster brother in her charitable foundation, Emily seizes an opportunity to regain some of her missing past while settling the score with someone who had a hand in setting her on this path in the first place.

Sunday, March 31st – “Masquerade”
Hamptonites celebrate Halloween with a glamorous masquerade ball hosted by the Graysons, which is a perfect setting for Emily to drag out Victoria’s skeletons. Jack steps up his revenge plan and finds an unexpected ally, and Aiden makes a bold move with a gruesome conclusion.

Are you excited to see what Jack has in store for the Graysons? How will Emily dispatch of her foster brother without tipping anyone off? Is Aiden going after the Initiative on his own?